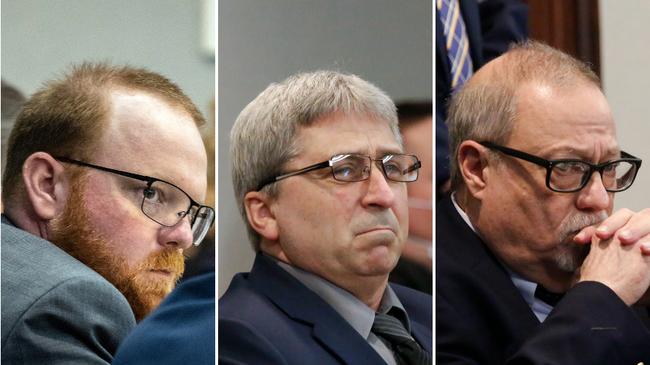 Greg McMichael, Travis McMichael and William R. Bryan, the three men who were found guilty of federal hate crimes for violating the civil rights of Ahmaud Arbery, are scheduled to be sentenced on Aug. 1 in federal court, according to the Associated Press. The trio of killers were sentenced to life sentences in a Georgia State Court in January of 2022 for killing the young black man

A Georgia judge, Timothy Walmsley, handed down sentences in the conviction of the three men found guilty of being  Ahmaud Arbery killers while the 25-year-old jogged in a south Georgia neighborhood handing down the harshest sentence available under Georgia law for at least two of the convicted murderers.

Travis McMichael received life plus 20 years without the possibility of parole.

Greg McMichael also received life plus 20 years without the possibility of parole.

Rodney Bryant who joined the hunt for Arbery and videotaped the incident was also convicted of felony murder and received life plus ten years with the possibility of parole.

The sentencing in the federal trial are seen as largely symbolic in that all three have already received life sentences, but face additional life sentences to demonstrate the heinousness of their racist views which lead to the death of the young Brunswick man.

The Georgis judge, Judge Walmsley focused on the facts and circumstances surrounding the case of the Ahmaud Arbery killers, when he delivered pre-sentencing remarks negating the defense’s claims that the defendants were in any way protecting their community and their neighbors, saying they “showed their worst charachter.”

In a dramatic demonstration of how the tragic events unfolded, the judge set silently for one minute to emphasize the fraction of the time as well as “the terror” that Arbery spent fighting for his life during the five-minute exchange that ended his life.

The sentencing was held at the Glynn County Courthouse, the same location as the November trial. All three men remain in custody at the Glynn County Detention Center after having been being found guilty of murdering the 23-year-old jogger. They are awaiting trial for separate federal hate crime charges for the Feb. 23, 2020 murder in Brunswick, GA.

“Please give all three defendants who are responsible for the death of my son the maximum punishment in this court, which I do believe is behind bars without the possible chance for parole,” Wanda Cooper-Jones said on Friday at the sentencing of the three men who shot dead her son.

During the victim’s impact statements for consideration in the sentencing portion of the case today, Wanda Cooper-Jones, Ahmaud Arbery referenced the shameful remarks from defense attorney Laure Hogue for making “beyond rude” remarks about her late son’s toenails.

“Turning Ahmaud Arbery into a victim after the choices he made, does not reflect the reality of what brought Ahmaud Arbery to Satilla Shores in his khaki shorts, with no socks to cover his long, dirty toenails,” Hogue said in her closing arguments on Nov. 22.

“I wish he would have cut and cleaned his toenails that day. I guess he would have if he had known that he was going to be killed that day,” said Cooper-Jones.

Other Arbery family members delivered emotional and moving addresses to the court, pleading for he maximum sentences.

“The man who killed my son sits in this courtroom every day next father,” emphasizing that was not possible for him.

A grand jury indicted the men on federal hate crime charges April of this year, and prosecutors and defense lawyers are seeking to have a larger jury pool for the trial, the Atlanta Journal-Constitution reported. Jury selection in the state murder trial made headlines after a slow, and admittedly discriminatory process shadowed proceedings.