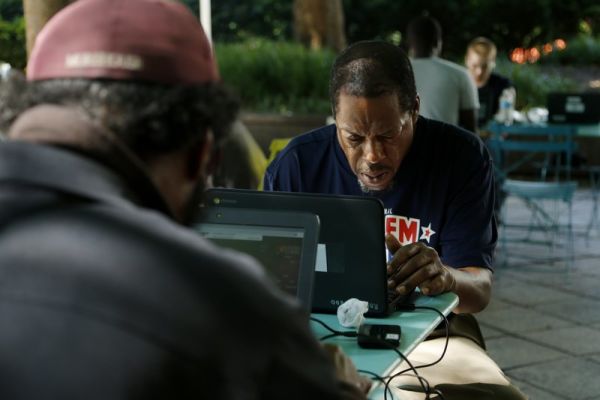 Sitting under a small event tent, Knate Leopold plays chess on a laptop set up in a temporary outdoor library downtown.

Leopold says he doesn’t have his own home but finds refuge in Atlanta’s downtown area and frequently visits nearby libraries. He used to play chess daily at the Central Library before the branch closed for renovation; now his virtual matches take place during Library on the Lawn hours, anywhere from 10 a.m.-4 p.m. Monday through Wednesday.

The Atlanta-Fulton Public Library System and the nonprofit community development organization Central Atlanta Progress organized Library on the Lawn in Woodruff Park last summer and reopened in April, primarily to meet the local community’s needs during the renovation. The initiative also has allowed librarians to provide resources to those who wouldn’t normally venture inside a library, said Amanda Densmore, a community engagement librarian who noted that other branches are trying similar outreach initiatives.