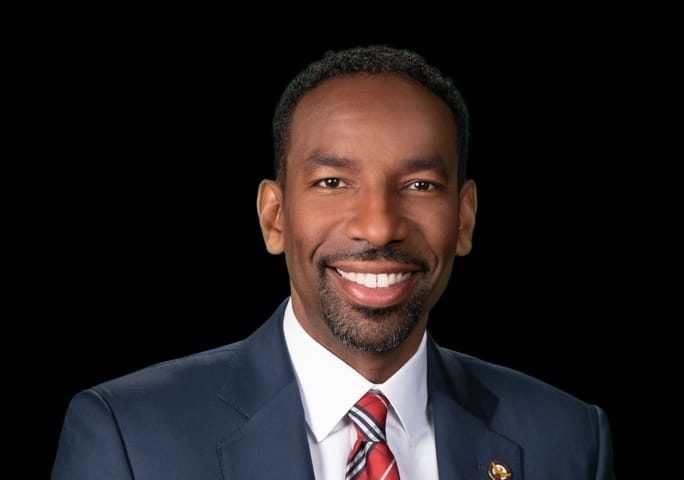 DETROIT — Atlanta Mayor Andre Dickens visited Detroit recently for a fundraiser backed by a majority of Black business owners. The newly elected mayor met with the business community and toured the city home to a population of more than 80% Black residents.

Atlanta is often noted as the epicenter for Black political and economic power in America and Mr. Dickens who has been on the job for five months, seizes on the opportunity to unite, engage, and learn from the urban business class in Detroit.

“We have a business relationship, but we also have personal relationships between Detroit and Atlanta,” said Mayor Dickens. “If you think about the great migration going north, coming from the south, a lot of southerners from Atlanta …went north to Chicago and Detroit to these great automotive industry jobs.”

In a joint interview with Real Times Media’s Michigan Chronicle and Atlanta Daily World, Mayor Dickens talked about best practices he’s learning from cities he’s traveled across the country and hopes to apply some of the same tools or similar ideas to his native city.

One of the places he toured while in Detroit, was the security command center of Bedrock, a commercial real estate firmed, owned by Detroit billionaire businessman Dan Gilbert.

He illustrated how the facility is equipped with several wall-mounted screens showcasing hundreds of cameras tied to Gilbert’s downtown properties.

“For public safety reasons, it’s a good thing, women feel safer walking at night and if an incident does happen you have good access to catch the person doing the crime and be able to have a good identification on them so you can prevent crime,” mayor Dickens adds. “It makes business people want to invest more so they know they will have a downtown area or other areas that are carefully being monitored.”

Mr. Dickens also understands the big brother surveillance issues he believes must always be closely monitored for the protection of an individual’s privacy. The city of Atlanta currently has a video interrogation system, but what he found impressive in Detroit was how the importance of public safety via camera surveillance was being led and funded by a corporate entity for public and private good.

Cities across the country have experienced a rise in crime, and particularly in urban communities.

“It’s unfortunate that we do have a gang problem and some of those folks are musicians.”

Mayor Dickens is talking about the recent arrest of rappers allegedly involved in gang activity. The peach city made national headlines last week when popular rapper Young Thug was arrested in Atlanta as he faces a list of accusations from the Fulton County prosecutor, alleging him to a founder and active leader of the violent Young Slime Life street gang.

The 80-plus page indictment charges both Young Thug and another rapper, Gunna, with gang-related crimes, and includes more than 25 others who have allegedly participated in YSL gang activity.

“Hip-hop does not have to mean violence,” said mayor Dickens. “If we make sure that Hip-hop means entertainment, it means culture, it could be political influence, it could be social justice.”

“…Once hip-hop and media have equated themselves to violence, gang activity and destruction, that’s when we have to look at ourselves and course-correct that.”

The mayor who is an Outkast music fan believes his city should continue to be the epicenter of the Black music industry.

“I’m very big with making sure we have a thriving hip-hop community. The Atlanta music scene has influenced the nation. It used to be New York or L.A., but now Atlanta has all the producers and all the hits.”

Mayor Dickens also confronted the issue of the pandemic-related crime wave which saw his city open for business during his time on city council. He attributed the violent wave of people engaging in criminal behavior from out-of-towners not knowing the rules of engagement as leadership in the state of Georgia pressed against COVID-19 business closures, which allured visiting guests from other cities across the country.

Dickens recognizes the nightlife and entertainment is a part of the vital culture and economy of Atlanta. To combat crime, he has now implemented a nightlife division, a first for the city.

The mayor has appointed a night life manager, and implemented news safety precautions which requires every restaurant, bar, and club must have a security plan and security guards.