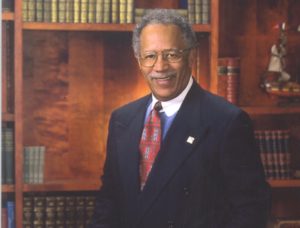 “C.T. Martin made a tremendous mark in District 10 and the city of Atlanta. He served his city incredibly well and our community is a much better place because of his legacy and impact. First elected in 1990, he made countless connections with people during his time at City Hall, but his life and influence extended throughout our city and even across the globe. He will long be remembered for his generosity, passion for the Adamsville community, and helping to make Atlanta a more equitable place. There are so many pinnacle moments in his career, but the renaming of the Adamsville Natatorium and Recreation Center in his honor will forever be a highlight in our city’s history, particularly for those who served alongside him on the Council. He spent his life in service to others and our thoughts and prayers are with his friends, family and the community as we mourn his loss and honor his legacy.” – Atlanta City Council

“It is with a heavy heart that I acknowledge the passing of The Honorable C.T. Martin, Dean of the Atlanta City Council and long-term District 10 Councilman.  For 20 years of my public service career, it was my privilege to serve with Council Member Martin.  He established his own unique footprint during the Civil Rights era and managed to further extend his leadership as an elected official with significant influence.  C.T. Martin was a man of great resolve who cared deeply about the welfare of his constituents and advancing the collective experience of the African American community.  He will be missed not only by his colleagues, but by the entire city of Atlanta. My condolences are with the family of C.T. Martin as they absorb this loss.  I also pray for the City of Atlanta as we say goodbye to another of our most prominent leaders.  Let us remember the many positive lessons we have learned from our giants and carry them with us into Atlanta’s future.” – Council President Felicia Moore

“Today, we pause to honor the life and legacy of one of Atlanta’s great giants, C.T. Martin. He was a giant of civic leadership, a giant of community activism and a giant of advocacy for the least of these.

Clarence T. (C.T.) Martin was much more than just the “dean” of the Atlanta City Council where he served over three decades. He was a political mentor and a leader who fought tirelessly for those who had no voice in the halls of power and government.

On behalf of all of those who live in Fulton County, and in particular The Mighty6 Commission District, I join the thousands of Atlantans and Georgians who are mourning the loss of this great man and send heartfelt condolences to his family.

Personally, I take great pride in knowing that for years C.T. represented me and my family on the City Council; and that for a brief period in the twilight of his life, I had the honor to represent him on the Fulton County Board of Commissioners. Even more so, my family has been one of C.T.’s neighbors for as long as I can remember, growing up in the Peyton Forest community. His twin daughters, Beth and Rachel, and I were classmates in elementary and high school. My mother and C.T. were founding members of the Chalet/Peyton Woods Community Club. So, for me this hits home, and especially to occur just two years to the same week that we lost one of C.T.’s greatest friends and political comrades, the late Fulton County Commissioner Emma I. Darnell (who died two years ago this past Wednesday).

While we are saddened by his death, we must remember that C.T. is still with us now—and will always be—so long as we keep him in our hearts and our minds and take up each and every battle he would undertake for fairness, equality, justice and freedom.

May God bless his family and his friends—now and forever more—as they come to terms with Councilman Martin’s transition.”