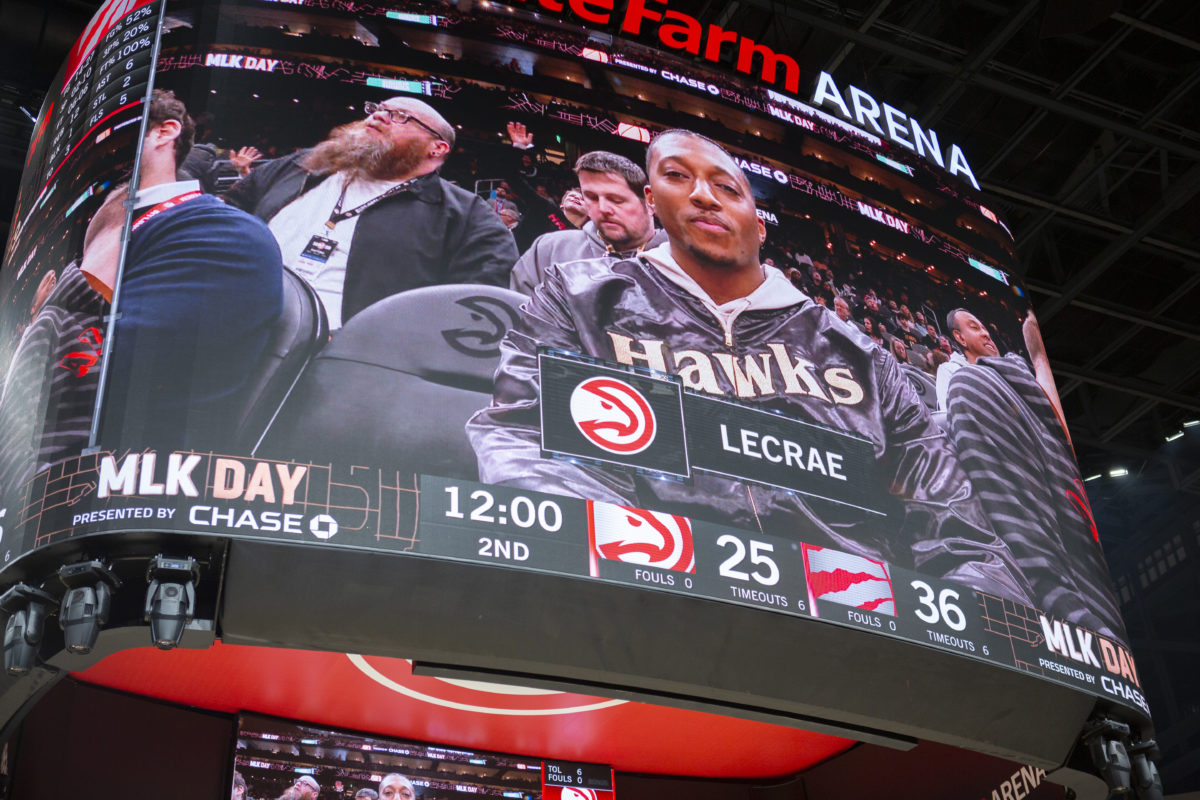 Lecrae’s show-stopping halftime performance at State Farm Arena was the uplifting experience fans were hoping for on MLK Day. The award-winning inspirational hip-hop artist went on to bring the house down with an equally exciting postgame show sending Hawks fans into the rafters with his soulful songs of encouragement and faith.

Lecrae, winner of two Grammys and nine Dove Awards, including the 2019 Album of the Year for his collaboration with Atlanta producer Zaytoven, Let the Trap Say Amen, performed at both halftime and post-game shows when the Hawks took on the Toronto Raptors.

Prior to the on-court performances, Lecrae, also a best-selling author and entrepreneur, participated in an extraordinary “Faith and Family” panel discussion with special guests, Keri Potts, Founder of A Fight Back Woman, Inc. and Rodney D. Bullard, Executive Director of the Chick-fil-A Foundation, centered around the theme of “Restoration” and its application in our everyday lives.

The Atlanta Daily World caught up with Lecrae to discuss his music, his latest book and his inspiration in an exclusive interview at the Delta Skyline Club.

You shared some pretty personal experiences about hardships you’ve faced during the panel discussion, What compelled you to speak so candidly about some of the pain you’ve experienced?

I came from a single-parent household. My Pops had his struggles with drugs and whatnot and my mother did her best to keep us afloat. I definitely had some negative experiences, but I am all about being able to rise above. I thank God, my mom, my aunts and my grandmother for inspiring me.

Restoration is a recurring theme for you, in your latest book and the upcoming Album titled Restoration. Is that why you’ve partnered to restore and redevelop the English Avenue neighborhood in Atlanta?

They call it The Bluff, you know like “snow on the bluff.” To me, it was important to be connected to disenfranchised communities wherever I am. A good friend of mine, Benjamin Wells, lived in the Bluff and he said God told him that he was supposed to do something in this neighborhood. I was looking for a way to get involved and he told me about a vision he had for a school. I got behind him 110 percent, whether it was finances or time commitment. That was four years ago and now we have a school there, Peace Academy. We also started a foundation to help displaced people get in homes, so now we have mothers in those homes. [Forty-four percent of the houses on English avenue were abandoned or vacant].

It’s a holistic transformation in that neighborhood. I just want to see my ceiling be there floor, whatever my limit is I want them to be able to soar from there.

How did you rise above and overcome obstacles you faced?

It took a lot of blood, sweat and tears, and it is all worth it.

Lecrae’s Ashamed is available on shelves now. His new book I Am Restored will be released in Spring 2020 along with his forthcoming album Restoration.