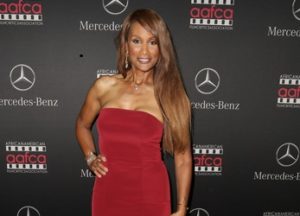 Beverly Johnson made history as the first Black supermodel to grace the cover of Vogue in the 1970s, and went on to write “The Face That Changed It All: A Memoir.”

Now, she is fighting for equality and representation in the fashion industry, and recently penned a powerful op-ed about racism for The Washington Post.

“Extra’s” Cheslie Kryst caught up with Beverly, who said she was prompted to write her op-ed after Vogue’s Anna Wintour sent an internal email to apologize for not doing more to elevate Black voices and for publishing items that were racially and culturally “hurtful or intolerant.”

Addressing Wintour’s comments, Johnson said, “I was just surprised that there must have been a lot of pressure in order for her to write that, and I think that it really opened up the conversation in a lot of different industries who are addressing the problem of systemic racism in their industry.”

Hoping she can elicit change now, she added, “The things in the op-ed are things I have been saying my entire career, the whole 50 years… People are listening to what we are saying and believing what we are saying, so I think this was the time.”

“I wanted to do something in the way that was actionable… That rule is for an opening that two Black professionals should be interviewed and not only be interviewed for a model, but for the board of directors, the C suites, the executives. We want to be in the room, and I think maybe this rule will get people to do just that.”

While she graced the cover of Vogue in 1974, Johnson feels that African-American models are still not on equal ground. “We’re not paid for it. We take one step forward and five back,” she said. “It really hasn’t changed very much. I mentor a number of young models, and what they are complaining about are the same things I was complaining about.”

As for what she would say to Anna Wintour if they spoke face-to-face, Johnson replied, “’Why don’t you put the Beverly Johnson Rule as part of a mandate at Condé Nast and give two black professionals the opportunity to interview for any open positions?’ And I would state what the Rooney Rule did in the NFL, and [that] it’s also been instituted in the Writers Guild, so there is some evidence that it works. So that is what I would say to her.”