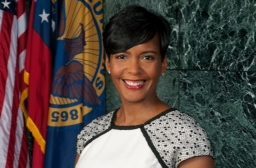 President Joe Biden has tapped former Atlanta Mayor Keisha Lance Bottoms to join the White House as a top advisor as the upcoming November midterm elections loom over the administration.

On Wednesday (June 15), Biden announced Bottoms’ appointment as director of the White House Office of Public Engagement, per the Washington Post. Bringing Bottoms into the fold will add a needed Black woman’s perspective amid a political time that will determine the fate of the rest of Biden’s presidency.

The former mayor joins Biden’s inner circle during a tumultuous time for the administration — with inflation on the rise, the president’s approval ratings continue to hit all-time lows, which could hinder the Democrats’ chances of gaining control of Congress in the November elections.

However, as Director of Public Engagement for the White House, Bottoms will open the lines of communication between local, state, and national constituency groups and Biden, bringing needed feedback to the administration.

When announcing the appointment, Biden praised Bottoms’ diligence in Atlanta as the pandemic hit, protests erupted, and mass shootings targeted communities of color.

“Mayor Bottoms understands that democracy is about making government work for working families, for the people who are the backbone in this country,” Biden said in a statement. “Keisha is bright, honorable, tough, and has the integrity required to represent our administration to the American public.”

Bottoms will be replacing former Lousiana Congressman Cedric Richmond, who left the role in April.