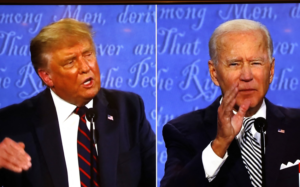 With just too many states left to complete election tallies, the biggest prize of the 2020 electoral college, might well see Joe Biden take the lead to become 46th president of the United States.

After a historic campaign cycle, vigorous get-out-the-vote efforts and a brutally contested election, former Vice president Joe Biden holds a slight lead in the 2020 presidential election. Biden’s election campaign strategy of multiple paths to the White House garnered support with voters in key states and will likely earn him the win in battleground states like Michigan, Wisconsin Arizona and Georgia to end one of the most oppressive and polarizing presidential administrations in modern history.

While early results indicated a nail-bitingly close race initially, Biden announced just before midnight on Tuesday that he remains optimistic about a win and cautioned supporters to be patient with the count.

Although Donald Trump falsely declared himself the winner at 2;30 a.m. on Wednesday and insinuated that Democrats were cheating at the polls, wishing just doesn’t make it so.

“It’s the people who decide the results of elections –– not candidates, elected officials, political parties, or anyone else. We have the power. Election officials are working hard to ensure every vote is counted amidst historic turnout and we will be patient while the results are tallied. Despite a global pandemic and Trump’s attempts to bully his way through this election, the people … showed up in record numbers. Trump is just sowing division to try to get what he wants. What we’re calling for is unity and for the will of the people to win the day,” said a representative of a national watchdog organization.

Trump’s handling of the surging pandemic and the worst public health crisis in a century – killing more than 231,000 Americans – was inevitably his undoing according to exit polls. The former POTUS’s scheme to cheat his way back into the White House, including decreasing the number of polling places, by making it more difficult to vote and tampering with the U.S. mail was not enough to overcome the will of the people this time who turned out in record numbers.

“We will work to unite the country around solutions that will push our country forward, and most importantly, I will listen to those impacted by the long-standing inequities in our system—especially Black Americans, Latinos, Asian Americans, and Native Americans,” Biden said in a letter to the Atlanta Voice.

The hard-fought campaign indicates that voters – both Democrats and Republicans – are eager to move on and work to return the country to civility and regain international prominence and respect.

“I believe there’s a lot of division and separation,” said Kelvin Hardnett, who was among more than two dozen voters who lined up more than an hour before the polling site at the Cobb County Civic Center outside Atlanta opened on Tuesday morning. “And I believe that once we get past the names and the titles and the personal agendas, then you know, we can focus on some real issues.”

How people of color disrupted stereotypes and turned out in massive numbers: