Black Atlanta music scene prior to the hip-hop invasion 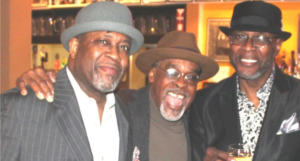 The following article on social life on Black Atlanta is the fourth and final of a four-part series spotlighting Atlanta’s rich social scene, prior to the meteoric success of hip-hop and other mediums, including the rise of Tyler Perry as an international movie mogul. The series targets Atlanta’s social scene circa 1960 thru 1990. Enjoy and be educated about a wonderful era, way before Atlanta became the “ATL”. Veteran music writer Timothy Cox offers his personal insight about a unique period in our city’s rich music history.

Ken Broughton says adverse changes started impacting the city’s black social scene whenever disco music started making inroads in the late 1970s and early 1980s. “It really changed around that time – that’s when you no longer needed a dance partner – and the bands started diminishing — technology starts kicking-in and now all you need is a computer, to hook up to large speakers.

“Regardless, when we did our parties, we’d had a reel-to-reel and we’d run it for a couple hours – and mix it with fast songs and some slow drags — then you started seeing women dancing with women, then the line-dancing started up – the “Electric Slide,” he recalls.

Reggie Ward says he agrees with Broughton, but adds: “(The changes) could have something to do with us growing older, but I don’t think it’s really that. When we performed as bands years ago, we had shows; not just a jam-band attitude, like now. Then, we rehearsed to make sure our product was refined and professional and tight. That feeling no longer exists,” he said. “It’s just a little something that’s missing these days, when it comes to today’s performers.”

Norris Gay, 70, grew up in the Fourth Ward and in the Kirkwood Community near Auburn Avenue. As a proud native Atlantan, Mr. Gay said he graduated from David T. Howard High School in 1969.

In the 1970s, he recalls hanging out at the Regal Room when SOS Band was the house band. He also made his way to the Electric Ballroom, where groups like Mother’s Finest, Hall & Oates, Ted Nugent and BB King performed. But the Decatur resident says you can’t reflect on Atlanta’s social life without talking about strip clubs. “At one time, I believe Atlanta had the most strip clubs in the nation,” he said. Places like Magic City, Gold Club, Blue Flame were popular stops also known as “gentlemen’s clubs,” he said.

But social life wasn’t always pleasant, said Gay. He vividly recalls one evening in 1975 when he was at San Souci, and asked a white girl to dance. He said he was ultimately removed from the club because he was wearing jeans, but he feels the real reason was “frowned-on” interaction with the girl. “It was still a challenging period at that time. Things hadn’t totally changed,” he said.

After relocating from his native Canton, Ohio, John A. Bell Jr. , 60, said his favorite spots were the “old-school” lounges that specialized in vintage ‘70s and ‘80s RnB. “I’m talkin’ Sharon’s on Lavista Road, Chit-Chats and my favorite was Faces on Glenwood Avenue in Decatur,” said Bell, an Alpha Phi Alpha product of Kent State University. He and his wife, Kozette Bell, are now grandparents and live in Roswell, but rarely socialize these days.

According to Abdul Ra’oof, trumpet player for the SOS Band, the Regal Room “was the hot spot in the 1970s, when Campbellton Road was the place to be. Mr. V’s Figure 8 was originally a country & western place. Although, I wasn’t in the original band, at that time,” he said, “SOS Band was then called Santa Monica Experience,” reportedly based on good experiences when the band played near Los Angeles. After being signed to Tabu Records, it was mogul Clarence Avant who assigned music director Sigidi Abdullah to convince the band to change their name to SOS aka Sounds of Success, says Ra’oof.

“We played the Regal room six days a week, including the very popular Saturday afternoon jam sessions, he said. “At the time, I was still working with my 10-piece band from Albany – the Velvetones (later renamed Third World) – which included myself, Reggie Ward and Sultan Muhammad. Henry Wynn owned everything on Auburn Avenue at the time, including the Royal Peacock. Henry’s Supersonic Productions had Atlanta on-lock,” he said. Ra’oof also noted that he and Muhammad, both became Nation of Islam members which explains their name-changes after leaving their native Albany.

In the 1990s, when LaFace Records became a major entity, is ironically when the Atlanta Braves rose to prominence as a Major League Baseball dynasty. This occurred as the team won 14 consecutive Division titles – featuring the likes of John Smoltz, Chipper Jones, David Justice, Terry Pendleton, manager Bobby Cox and two-sport stars Brian Jordan and Deion Sanders. The team copped its only World Series title in 1995, mainly when Sanders incorporated the “Tomahawk Chop” to Turner Field fans, from his gridiron days while at Florida State University. Still, the Braves will forever be linked to the great homerun champion, No. 44, Henry “Hank” Aaron of Mobile, Alabama.

Cleveland “Shang” Bibbens was an All-American basketball player at South Hills and Brashear high schools in Pittsburgh, before migrating to Atlanta. “I came here before they started calling it the ATL, Dirty South and HOTlanta,” said Bibbens, who also played at Michigan State University, but fell just short of an NBA career. At 58, he still has good recollections of being a young athlete and hitting the social scene in Atlanta. “The club life was full of live bands and deejays. We just fit-in well – wearing suits, and lookin’ good. There were no crazy drugs – maybe some weed and booze,” he said. His favorite spots were Z-lights in Buckhead and Café Eschelon in Stone Mountain. With ties to members of the Atlanta Hawks and other pro athletes, Bibbens said he and business partner, Kevin Willis, were young, consistent socialites.

At 6-8, Bibbens and the 7-foot Willis, a former Hawks center, were often visible targets of young ladies seeking hoop dreams, he said. “That was a different era for Atlanta – we would hangout at Dominique’s or Deion’s – and those places were poppin’,” Bibbens recalls. “This is the era when MC Hammer started making inroads with the Atlanta Falcons, pacing the sidelines with “Dirty Birds” like Andre “Bad Moon” Rison and Deion “Prime Time” Sanders – making videos and stuff – that’s when the town started attracting rappers and the foundation was laid for the reality TV culture of Tyler Perry we now witness,” said Bibbens, himself a marketing and clothier entrepreneur of sports apparel.