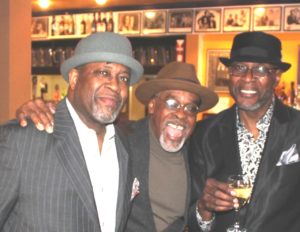 Ken Broughton says adverse changes started impacting the city’s black social scene whenever disco music started making inroads in the late 1970s and early 1980s. “It really changed around that time – that’s when you no longer needed a dance partner – and the bands started diminishing — technology starts kicking-in and now all you need is a computer, to hook up to large speakers.

“Regardless, when we did our parties, we’d had a reel-to-reel and we’d run it for a couple hours – and mix it with fast songs and some slow drags — then you started seeing women dancing with women, then the line-dancing started up – the “Electric Slide,” he recalls.

Reggie Ward says he agrees with Broughton, but adds: “(The changes) could have something to do with us growing older, but I don’t think it’s really that. When we performed as bands years ago, we had shows; not just a jam-band attitude, like now. Then, we rehearsed to make sure our product was refined and professional and tight. That feeling no longer exists,” he said. “It’s just a little something that’s missing these days, when it comes to today’s performers.”

Norris Gay, 70, grew up in the Fourth Ward and in the Kirkwood Community near Auburn Avenue. As a proud native Atlantan, Mr. Gay said he graduated from David T. Howard High School in 1969.

In the 1970s, he recalls hanging out at the Regal Room when SOS Band was the house band. He also made his way to the Electric Ballroom, where groups like Mother’s Finest, Hall & Oates, Ted Nugent and BB King performed. But the Decatur resident says you can’t reflect on Atlanta’s social life without talking about strip clubs. “At one time, I believe Atlanta had the most strip clubs in the nation,” he said. Places like Magic City, Gold Club, Blue Flame were popular stops also known as “gentlemen’s clubs,” he said.

But social life wasn’t always pleasant, said Gay. He vividly recalls one evening in 1975 when he was at San Souci, and asked a white girl to dance. He said he was ultimately removed from the club because he was wearing jeans, but he feels the real reason was “frowned-on” interaction with the girl. “It was still a challenging period at that time. Things hadn’t totally changed,” he said.

After relocating from his native Canton, Ohio, John A. Bell Jr. , 60, said his favorite spots were the “old-school” lounges that specialized in vintage ‘70s and ‘80s RnB. “I’m talkin’ Sharon’s on Lavista Road, Chit-Chats and my favorite was Faces on Glenwood Avenue in Decatur,” said Bell, an Alpha Phi Alpha product of Kent State University. He and his wife, Kozette Bell, are now grandparents and live in Roswell, but rarely socialize these days.