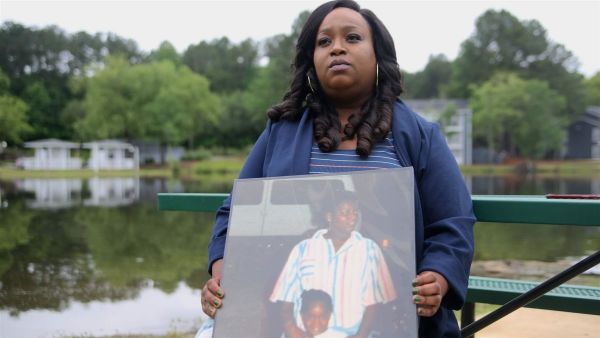 PHOTO: Breast cancer survivor Felicia Mahone, holding a photo of her and her mother, who died of breast cancer, has devoted her life to helping other women through the course of treatment.The Pew Charitable Trusts

UNION CITY, Ga. — When Felicia Mahone was 27, she felt her breast and found a mass. Breast cancer had killed nearly all the women in her family — her mother, two aunts and two cousins. Her doctor, though, downplayed the lump, assuring her everything would be all right.

For months, Mahone resumed her busy life. But she couldn’t shake the feeling the lump might be a tumor. So she saw another doctor at Grady Memorial Hospital in Atlanta. There was more testing, and more nervous waiting. Finally, a biopsy confirmed her deepest fears: stage two breast cancer. Daunted by the prospect of facing cancer without family support, she made a vow to God: Get me through this, and I’ll help others not to go through this alone.

Treatment advances have improved breast cancer survival rates among all U.S. women, but the disparity between white and black women has grown: Black women such as Mahone are 40% more likely to die from the disease than white women, according to the Centers for Disease Control and Prevention.

No region has as many high-disparity states clustered together as the South. Louisiana and Mississippi have the highest racial disparities in breast cancer mortality. In both of those states, the excess death rate among black women is more than 60%, according to the American Cancer Society. Alabama, Arkansas, Georgia, North Carolina, South Carolina and Tennessee all have excess death rates over 40%.

“We automatically think that, when we get cancer, we’re doomed and that it’s a death sentence,” said Mahone, referring to black women. “We don’t talk about cancer, don’t share it, don’t embrace our hair falling out, and don’t want to look sick. So many other women, though, are living for years.”

Even though black and white women have similar mammogram screening rates and black women have a lower overall incidence of breast cancer, black women are more likely to die from the disease. In explaining the disparity, one oncologist described a “perfect storm” of scientific and social forces.

One of them is that researchers haven’t developed advanced treatments for a series of aggressive tumors — known as triple-negative breast cancer — that black women are more likely to get. Another is that recent advancements in cancer therapies for other kinds of tumors have yet to be fully proven in minorities, in part because of the lack of diversity in those clinical trials.

And black women have described feeling cast aside by a health system of doctors, nurses and support groups that rarely look like them; and face further obstacles outside labs and hospitals — including lack of access to jobs, transit and health insurance. This marginalization of black women is especially prevalent in the South.

“This makes people, especially black women, who are busy working and providing care to family members, not want to waste their time,” said Alisha Cornell, who worked as a registered nurse in North Carolina. “The way we are treated makes us feel shameful or unimportant.”

Federal officials have taken some steps to reduce this disparity, from awareness campaigns to collecting long-term health data from minority communities. Alabama officials have mandated that low-income women diagnosed with breast cancer be automatically enrolled in Medicaid. And Tennessee officials have used health data to identify counties with the highest disparities, and convinced hospitals to send mobile mammography clinics to those areas.

But for the most part, the task of closing the gap has fallen to individual actors and institutions. One Georgia survivor, having experienced the lack of culturally relevant support groups, built an inclusive and diverse support community for those facing breast cancer. In Louisiana, one doctor has pushed to not just study breast cancer in black women — a long understudied corner of research — but has urged researchers to partner with minority communities.

“We know the data, and we know the statistics,” Dr. Valerie Montgomery Rice, president and dean of the Morehouse School of Medicine in Atlanta, said in a recent speech on cancer disparities. “I hope we move beyond the disparities and put our dollars toward solutions that not only close these gaps but lead to health equity.”

Tiah Tomlin, a Georgia resident who once worked in the pharmaceutical industry, initially thought her triple-negative breast cancer diagnosis was a good thing. Then her doctors broke the news that her specific cancer, which disproportionally affects black women, was one of the hardest cancers to treat.

Triple-negative tumors don’t have the most common types of hormone receptors, estrogen and progesterone, and don’t produce too much of the protein HER2. Even though her tumor tended to be more aggressive, she would not be able to benefit from the targeted therapies developed for other forms of cancer.

Tomlin — who was diagnosed at 38, before the recommended age for routine mammography screenings — ultimately survived breast cancer. Her experience, however, opened her eyes to the institutional challenges faced by black women with breast cancer.

“I didn’t feel like my voice was being heard as a patient,” Tomlin said. “The disparities are real. I wanted to know why.”

Black and white women receive mammograms at near equal rates, but the mortality disparity widens after breast cancer diagnoses.

Mya Roberson, an epidemiological researcher at the University of North Carolina-Chapel Hill, said it is impossible to isolate a single reason for the post-diagnosis disparity, but she believes it has to do with “historical and present day political and social processes that have pushed black women in the South to the complete margins of society.”

Tomlin has seen this play out in support groups. During her cancer battle, she sought out a community of women who shared her struggle. But in Atlanta, a city known as a Black Mecca, the groups she found were often full of older white women who couldn’t fully understand the unique challenges faced by younger black women.

In a 2014 review of studies on women diagnosed with breast cancer, researchers noted women who negatively coped with their diagnosis — including emotional suppression and behavioral disengagement — “experienced increased levels of distress and poorer survival.”

“I wanted to understand what other young women of color without kids were experiencing,” Tomlin said. “Nobody looked like me. They’d answer the best they could, but they had never been a young brown girl, and walked in those shoes.”

Without that, Tomlin knew that black women lacked the space to talk about how their concerns went unheard by a medical profession that skews white and male. More importantly, she feared that stigma prevented women like her from sharing their diagnosis within their respective communities.

So she started a Facebook support group called My Breast Years Ahead. In that group, women from all walks of life can help each other through barriers that are medical — the pain, the treatment regiments, the side effects — and nonmedical — lack of transportation, costs of child care, unsupportive families.

“People won’t even tell their families that they have breast cancer,” said Cornell, the North Carolina nurse. “They die because of a fear of going to the hospital, finding out something is wrong, and not being able to financially afford it or put your family in a bind. With that fear, we wait.”

At the 2019 American Association for Cancer Research’s annual conference, health experts agreed on one major reason behind this disparity: lack of diversity in clinical trials. Despite progress by cancer researchers, Dr. Shafiq Khan, a biological sciences professor at Clark Atlanta University, said treatments developed and approved are disproportionately tested on white people.

Since 2016, the Food and Drug Administration has approved four novel drugs for breast cancer. However, none of those clinical trials had more than 3% black participants.

“It’s always been thought that black women can’t be recruited because they don’t want to be,” said Athena Starlard-Davenport, a genetics professor at the University of Tennessee Health Science Center. “I’ve found the opposite in Memphis. Black women say they want to help — and help future generations — but they don’t always know where to go.”

During an American Association for Cancer Research panel, Melissa Davis, an assistant professor of genetics at the University of Georgia, called for more “pressure on biopharma to require more diversity” in clinical trials, so those companies “don’t have the luxury to say, ‘It’s too difficult.’”

However, Miele believes the cancer research community shares the burden of recruiting more diverse clinical trial participants. He believes that aspiring cancer scientists must learn how to conduct research not just in labs but also out in communities of color.

Until that happens, Beverly Tolliver Foringer, a senior clinical research associate with Bayer, said studies will remain narrow in their findings. (Foringer noted that her views expressed her own opinion and that she was not speaking on behalf of her employer.)

“As new technologies and precision medicine become available, there will be another gap if we don’t do something,” said James Lillard, associate dean for research at Morehouse School of Medicine.

Dr. Temeika Fairley, a senior health scientist in the CDC’s Division of Cancer Prevention and Control, said the Atlanta-based agency has conducted awareness campaigns targeting younger black women facing breast cancer. They have also made information on breast cancer available to Hollywood screenwriters, in hopes that they might incorporate health information into storylines in a way that destigmatizes the disease.

Davenport, for her part, has partnered with Memphis community advocates to collect saliva samples to develop a better understanding of the genetic factors that contribute to breast cancer in black women. And the University of Alabama-Birmingham has trained a small army of black women — dubbed the “cancer ladies” — to spread information in their hometowns about how to get screenings and the fact that state law allows for low-income women with breast cancer to be enrolled in Medicaid.

Michelle Martin, a preventive medicine professor at the University of Tennessee Health Science Center, believes support during treatment is exactly what black women need. In a large study published in the Journal of Oncology Practice, she found the use of a patient navigator made black people with cancer — including many with breast tumors — five times more likely to complete a clinical trial.

After a grueling series of treatments — bilateral mastectomy, chemotherapy and breast reconstruction — Mahone defeated her cancer nearly 11 years ago. From that point forward, she kept her vow to God. Now a patient advocate, she guides other women through the course of treatment, reminding each of the advice she wished someone had given her: You have the right to ask questions. Get a second opinion. Put yourself first.

At one support group, Mahone shared her journey fighting breast cancer. In the room was Beverly Jones, a grandmother from East Point, Georgia, who had survived breast cancer but now had another tumor. The two connected afterwards. Mahone began calling Jones; sometimes just to check in, sometimes to offer a ride to the hospital.

Comforted by Mahone’s constant presence, Jones now feels more confident in sharing her story and spreading the word about screenings and treatment with her friends. Most comforting is the fact that, if she can’t help someone, Mahone is just a phone call away.

Stateline is an initiative of The Pew Charitable Trusts.