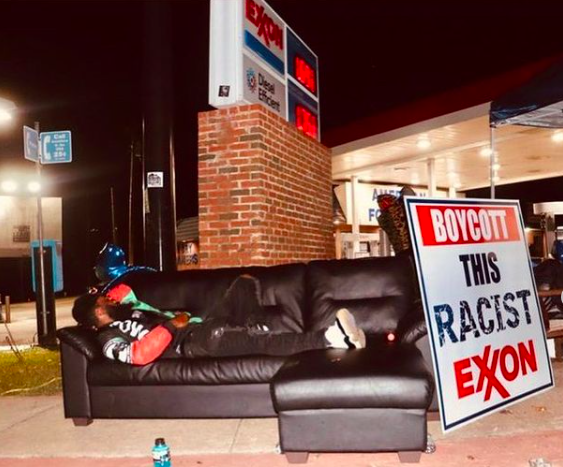 It all began with a viral video that caught the owner of a Flat Shoals Road Exxon Gas and Convenience store, American Food Mart, making vile and disparaging remarks including racial slurs to patrons, many of whom are women and live in this East Atlanta neighborhood.

With the video making the rounds, Joe Jones, the manager of a Grammy award-winning R&B artist decided to take action. So he set up shop right in front of the store and began asking shoppers to take their dollars elsewhere. “We are exercising our right to protest and demand change within the confines of the law,” says Jones. It’s located at 2345 Flat Shoals Rd. and now local television affiliates WSB-TV and WGCL-TV have also come out to report on the protest and have seen and aired the racially charged remarks on video.

As the Thanksgiving holiday approached, organizers set up a food bank style giveaway and
passed out nearly 400 fresh turkeys at the corner of Flat Shoals Rd. and Gresham Rd. “Last
[week] we gave away about 500 boxes of fresh food during our weekly community gathering,
and we continue to gain community support” says Jones. 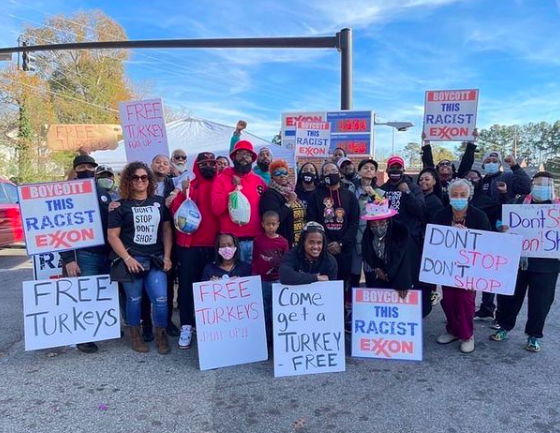 “This movement has been embraced by every level of our community, from bank vice presidents
to single mothers just trying to make it, we do have the power to make change,” added Jones.
The organizers say, the goal of this movement has always been to demand that those who do business in their community also treat them with respect, as dozens of stories of mistreatment and verbal abuse have been shared during the past twenty-eight days. “We’re not going anywhere because we’ve got time and we’re committed to empowering our people,” says Jones.

Jones sets up shop every day in front of the store along with his father and daughter to illustrate the unity and power ingrained in the movement. Community groups have donated water, fresh fruits and vegetables and countless other resources over the past three weeks. 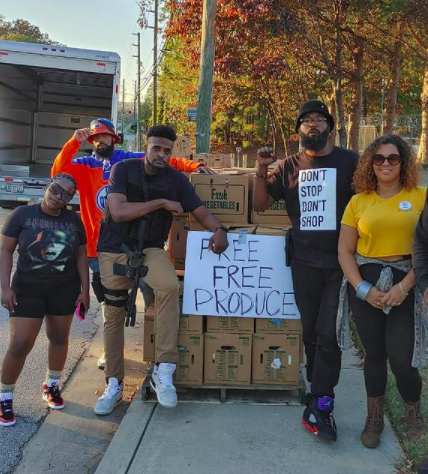 Now they’re focused on engaging with Exxon to see what kind of agreement can be made to
move forward. The group compiled many personal accounts and run-ins on their website and
is now working to educate the community on financial literacy and entrepreneurship. “If you
can’t treat us with respect, then you can’t do business in our neighborhood and we should work
toward owning all these kinds of businesses in our neighborhood anyway!” added Jones.