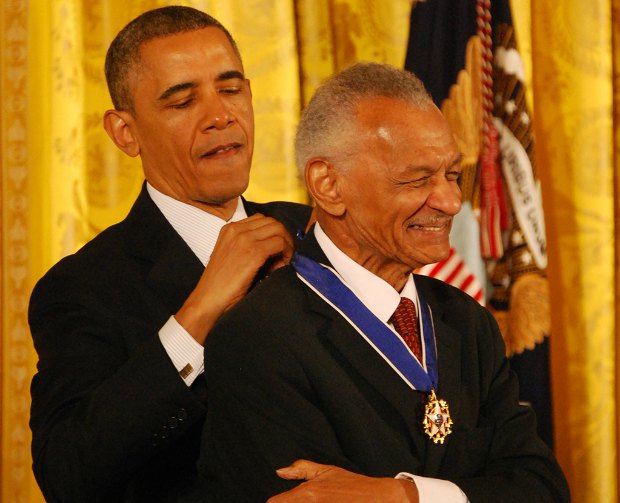 Cordy Tindell Vivian (July 30, 1924 – July 17, 2020)) was an American minister, author, and was a close friend and lieutenant of Martin Luther King Jr. during the Civil Rights Movement. Vivian continued to reside in Atlanta, Georgia and founded the C. T. Vivian Leadership Institute, Inc.

The civil rights legend died this morning of natural causes in his Atlanta home at the age of 95.

Dr. Vivian was a walking-talking history book. Maybe I know this because our paths cross so very much lately. We show up at the same community events. I have visited him in his home library/office – which is another amazing experience. He was a dearly beloved friend.

What a life this man has led. A civic leader, minister, educator, author, community activist and much more, Dr. Vivian is known as a friend and lieutenant of the Reverend Dr. Martin Luther King, Jr. who sacrificed and committed during the heat of the civil rights movement. The amazing feat about Dr. Vivian – “C.T.” as his friends call him – was that he remained in the midst of the civil service movement. And he has one of most endearing smiles I have ever seen.

The Reverend Dr. Cordy Tindell Vivian was born July 30, 1924 in Boonville, Missouri. He migrated with his mother to Macomb, Illinois and attended public schools. He graduated from Western Illinois University, where he worked as the sports editor for the school newspaper. He participated in his first sit-in demonstration, which successfully integrated Barton’s Cafeteria in Peoria, IL, in 1947 when he was 23 years old and working as recreation director for the Carver Community Center.

It was in 1959 when Vivian moved south to Nashville, TN to study the ministry at American Baptist College where he met Reverend James Lawson who was teaching Mahatma Gandhi’s nonviolent direct action strategy to the Student Central Committee. John Lewis, Diane Nash, Bernard Lafayette, James Bevel and others engaged in a nonviolent campaign for justice. In April, 1960, thousands of demonstrators marched on City Hall where Reverend Vivian and Diane Nash challenged Nashville Mayor Ben West. The demonstration resulted in Mayor West publicly admitting that racial discrimination was morally wrong. C.T. was one of the founders of the Nashville Christian Leadership Conference that organized sit-ins and civil rights marches and other protests. They were among the student civil rights activists who replaced the injured CORE (Congress of Racial Equality) Freedom Riders on the bus into Jackson, Mississippi.

As the editor of the Sunday School Publishing House for the National Baptist Convention in Nashville, C.T. met Martin Luther King while interviewing him at Fisk University for an editorial piece about the movement. Their friendship and the meeting of their minds, however, started on a train ride – a prayer pilgrimage – to Washington to celebrate the Montgomery boycott victory. The train entourage started in Texas; other trains joined in — picking up foot soldiers along the way — and C.T. got on board in Nashville. During the train ride, these two preachers talked about The Reverend Kelly Miller Smith, a pastor of the First Baptist Church in Nashville whom both of them admired. C.T. was 32 years old and King was around 27 years old; 4 ½ years younger than C.T. They also discussed the story that CT had written and published about Martin and they talked about the issues of nonviolent direct action. The train caravan ended in DC where Martin Luther King did a speech on voting rights – the power of the vote.

Vivian moved on to Chattanooga to pastor the First Community Church. In 1963 King invited Vivian to join the executive staff of the SCLC as the director of SCLC affiliates coordinating the activities of local civil rights groups nationwide. Vivian traveled across the USA making speeches for SCLC and preaching. C.T. recalls an occasion in Norfolk when he stepped into a pulpit to preach for Martin, facing a congregation of 6,000 plus, who expected to hear Martin Luther King. But Martin was comfortable sending C.T. to preach in his stead; Martin is often quoted as having said “C.T. was the best preacher he had ever heard.” Vivian was a close advisor to King and the organizer of many demonstrations, especially in Birmingham, Selma, Chicago, Nashville, the March on Washington; and St. Augustine, Florida. The St. Augustine campaign led directly to the passage of the landmark Civil Rights Act of 1964, and Vivian’s role in it was honored when he returned in 2008 to dedicate a Freedom Trail of historic sites of the civil rights movement.

Two years later, in an incident that would make national news, Vivian confronted Sheriff Jim Clark on the steps of the Selma courthouse during a voter registration drive. After an impassioned speech by Vivian, Clark struck him, therefore showing Clark to the world as a racist. Vivian said to Clark, “You can turn your back on me but you cannot turn your back on the concept of justice.”

During the summer following the Selma Movement, Dr. Vivian conceived and directed an educational program called “Vision,” and put 702 Alabama students in college with scholarships. This program later became known as Upward Bound. His 1970 Black Power and the American Myth was the first book to provide an analysis on the Civil Rights movement by a member of King’s staff. He is featured in the PBS series entitled Eyes on the Prize, a commentary on the Civil Rights Movement.

C.T. Vivian and his wife relocated to Atlanta in the early 1970’s where he has continued his work as a civil servant and an “instigator” for human rights. He founded the Black Action Strategies and Information Center (BASICS), a workplace consultancy on race relations and multicultural training. He also organized and served as chairman of the board of the National Anti-Klan Network, which is known as the Center for Democratic Renewal. In 1984, he served with Jesse Jackson’s presidential campaign as the national deputy director for the clergy.

Trying his hand in the world of business development, Vivian helped to establish and served on the board of the Capitol City Bank & Trust Co (Atlanta), an African American owned institution. During the Hurricane Katrina disaster, he launched Churches Helping Churches to respond to the need to help victims and churches that were affected by the storm.

He has been an advocate for Morris Brown College by using his influence to draw attention to the plight of the college and to mobilize the Atlanta community to create the “Yes We Care” campaign which raised approximately $500,000 toward the resurgence of the institution.

Dr. Vivian, who never seems to get tired, founded the C. T. Vivian Leadership Institute, Inc., a non-profit organization that seeks to provide information, strategies and best practices to community organizations, institutions and activists who desire education and training on critical issues of the time. He was sought-after as a public speaker and lectured around the world.

C. T. Vivian had been married to Octavia G. Vivian, his bride of many years. They have seven children. Their home is filled with memories and memorabilia of his life and experiences and it is an honor to listen to him tell stories about his encounters. When I bump into him at the neighborhood grocery story, he greets me with his engaging smile and calls me “sister” and I am amazed at the common touch this great man maintained.