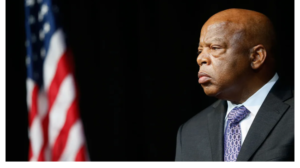 The civil rights icon began his fight for equality as a young college student. At age 25, he marched alongside Dr. Martin Luther King, Jr. and voting rights demonstrators as they crossed the Edmund Pettus Bridge in Selma, Alabama in 1965. Despite the peaceful demonstration, protesters, including Lewis, were severely beaten, in the event now referred to as “Bloody Sunday.”

The civil rights leader served 17 terms in the U.S. House of representatives, serving the 5th Congressional District of Georgia. Affectionately known as the “conscience of the Congress,” he was a member of Ebenezer Baptist Church. Pastor Raphael G. Warnock will officiate the funeral.

“It was my honor to serve as pastor to John Lewis, a man of faith and a true American patriot who selflessly risked life and limb in the sacred cause of truth-telling and justice-making in the world,” says Reverend Raphael G. Warnock, Senior Pastor of Ebenezer Baptist Church. “As a young man, John Lewis wrestled with a call to preach. But instead he became a sermon, and on a bridge in Selma, the living embodiment of the suffering servant of Isaiah. He was wounded for America’s transgressions, crushed for our iniquities and by his bruises we are healed. Today we weep. Tomorrow we continue the work of healing that was his life’s work.”

After one last trip across the Edmond Pettus Bridge in Selma, and also lying in state at the U.S. Capitol, Alabama State Capitol and Georgia State Capitol, Lewis’ body returns to Atlanta for a private funeral and burial.

Lewis, who coined the phrase “Good Trouble,” died on July 17. He was 80 years old. His funeral will stream live on the Ebenezer Baptist Church website, www.EbenezerAtl.org.