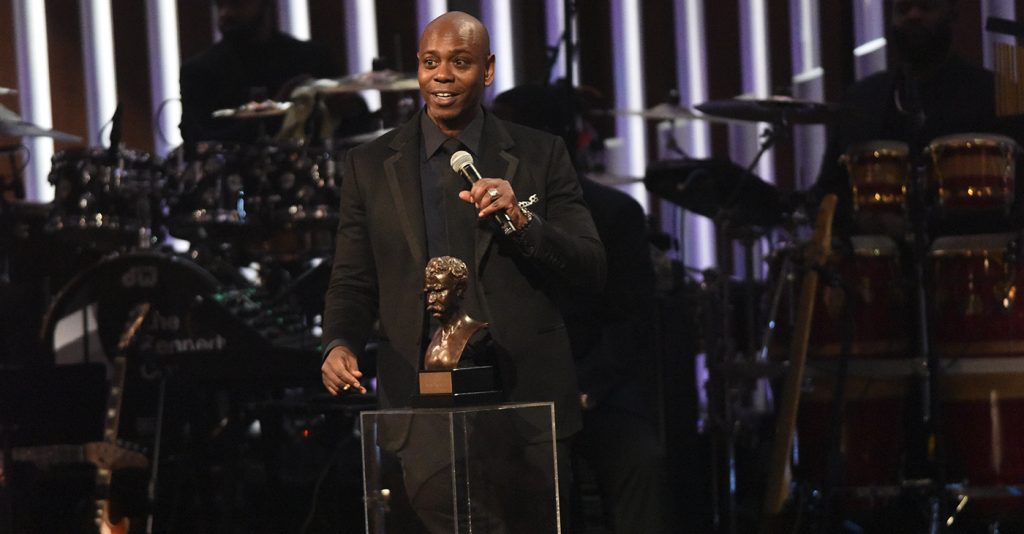 On Sunday night, Dave Chappelle, the legendary, no holds barred comedian, was awarded the prestigious Mark Twain Prize for American Humor. Gifted with a spirit of perseverance, determination and extreme creative intelligence, the award recognizes Chappelle as one of the world’s greatest humorists.

Bestowed only on a select few, including comedic geniuses Eddie Murphy, David Letterman and the late Richard Pryor (who received the inaugural award), Chappelle emphasized the importance of the genre, while also paying tribute to the late Pryor, during his award at the Kennedy Center.

In honor of Chappelle’s brilliance and ability to convey more than one thought-provoking  message within a single joke, the event brought out a slew of a-list celebrities, all eager to support the clever comedian and his work, including Morgan Freeman, Bradley Cooper, Marlon Wayans, Tiffany Haddish, Keenan Thompson, QTip, Sarah Silverman and Saturday Night Live (SNL) creator, Lorne Michaels, who recounted Dave’s 2016 anticipated hosting debut on SNL.

“I knew when the moment came, [Dave would] be ready to perform, yet small doubts about his appearance still lingered until, [he sat down] beside me and everyone in the room and asked if he could read a quote by Toni Morrison,” Michaels reminisced, as he delivered the first official remarks of the night.

“This is precisely the time when artists go to work. There is no time for despair, no place for self-pity, no need for silence, no room for fear. We speak, we write, we do language. That is how civilizations heal,” Michaels recited. “I knew then, we’d be ok.

A Washington, D.C. native and former student of the Duke Ellington School of Performing Arts (located in the Northwest quadrant of the District of Columbia), Chappelle recounted his love for the arts and an even bigger appreciation for those cultivating those same skills within the youth.

“To be on a list with Richard Pryor is unfathomable, like nobody would actually feel worthy enough,” Chappelle reflected during an interview prior to the award ceremony. “And not just Richard, you’ve got George Carlin, Lorne Michaels—that really shaped my imagination, my life… and I hope that one day, somebody will look at me the same way and literally stand on something that I’ve built on, that wouldn’t fall apart.”

“There’s something divine about artistry, it’s like the god-like part of a person that can write a song or tell a good joke, it’s the best part of our nature,” Chappelle said.

“Life without art would be miserable. If I could never laugh again at a great joke, hear no beautiful music, or only see bare walls, what kind of life would that be?” Dave went on. “You touch a higher part of yourself, you connect with people on a more profound level and society is better with good art, so it should be protected and cultivated, and the youth should be encouraged to express themselves in every way.”

However, it was Chappelle’s 2003 Comedy Central show, aptly titled, “Chappelle’s Show,” that cemented his place in history.

In a special recorded interview presented during the awards ceremony, Eddie Murphy heralded Chappelle as one of the most intellectual comedians ever. As the ceremony was coming to a close, the former host of “The Daily Show,” Jon Stewart, took to the stage to share his appreciation and admiration for Chappelle.

“I met Dave in the early ‘90s, a 17-year-old kid cutting his teeth in the toughest comedy clubs in the country and he was shockingly formed. This young prodigy. This young Mozart,” Stewart said.

“But he didn’t become a legend to me until 2005. I was at ‘The Daily Show’ and he was at ‘Chappelle’s Show.’ …Comedy Central offered him $50 million to just give us one more [season]. He walked away. It was at that moment I remember thinking, ‘Comedy Central has $50 million?’ …Dave left, but I knew that money was going to need a home. I want you to know that I raised that money like it was my own.”

Like the distinguished 19th century novelist and essayist best known as Mark Twain, Chappelle is among the small group of people whose humor has been able to have an enduring impact on American society and culture.

Chappelle shared that maybe the only thing second to being able to make people laugh is having the right to do so. “There’s something so true about this genre when done correctly,” Chappelle said. “That I would fight anybody that isn’t a true practitioner of this artform’s way, because I know this is the truth and you are obstructing it. I’m not talking about the content. I’m talking about the artform.”