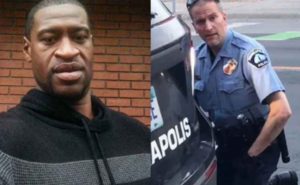 Testimony resumes today, Wednesday, March 31 in the Derek Chauvin murder trial of George Floyd. On Tuesday, Day 2 of the trial, the teenager, who recorded video of George Floyd’s death, broke down in tears on the witness stand and said she has been kept up at night, regretting that she didn’t do more to possibly save his life.

In an emotional high point of this two-day-old trial, Darnella Frazier could barely articulate her sorrow about witnessing Floyd as murder suspect Derek Chauvin knelt on his neck.

Three more young female witnesses delivered emotional testimony about the deadly encounter between murder suspect Derek Chauvin and George Floyd. The witnesses, now 18, 17 and 9, struggled to fight back tears and control their emotions while describing what they saw outside Cup Foods on May 25 last year when Floyd died after being under then-officer Chauvin’s knee for about nine minutes. One of the girls testified, “It seemed like [Floyd] knew it was over for him.”

Wednesday, morning’s session will resume with testimony from Minneapolis firefighter Genevieve Hansen the third witness to testify, that she called 911 to report Chauvin and fellow police officers detaining and ultimately killing Floyd.

Tuesday’s court session ended with the judge in the case admonishing a sympathetic witness Genevieve Hansen, the off-duty firefighter who called 911 to report Chauvin after she came upon the gruesome scene. She told jurors she was struck by how incredibly calm Chauvin — hands in his pockets — appeared to be while allegedly putting deadly force on Floyd’s neck.

“He seemed very comfortable with the majority of his weight balanced on top of Mr. Floyd’s neck,” Hansen testified. “In my memory he had his hands in his pocket. He looked so comfortable.”

Hansen, who said in court she was shocked by Chauvin’s comfort with his knee on Floyd’s neck was later harshly admonished by the judge in the case.

“I was finishing my answer,” Hansen said.

“I will determine when your answer is done,” Cahill retorted, his voice quickening.

Cahill then adjourned the court session and instructed Hansen to return at 9:30 Wednesday morning, when her cross-examination will resume.

The conversation came after a heated exchange between Hansen and defense attorney Eric Nelson, who was cross-examining her. Hansen will return to the stand Wednesday morning.l.

Floyd, a Black man, died May 25, after Chauvin, a white 19-year veteran of the department, pressed his knee into Floyd’s neck for several minutes.