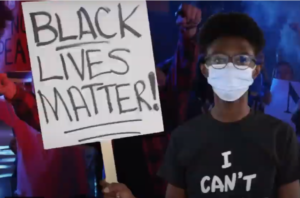 With the upcoming presidential election quickly approaching, the Social Cinema Foundation is committed to engaging young and minority voters at every level possible.

Clavo’s 30-second, non-partisan Get Out The Vote public service announcement is an insightful and moving social commentary directed to youth activists.

Given the foundation’s overarching mission of promoting expression of socially conscious themes through film, SCF launched the Vote Your Voice Matters contest to encourage students across the U.S. to create and submit short videos highlighting the importance of voting. Videos featured addressed topics from voter registration and COVID-19 safe voting to ways to access election boards and get your voice heard.

“Social Cinema is so proud of our youth for engaging in the importance of each of us expressing our voice through voting,” said an SCF board member. “Each video is inspiring and we can authentically connect with our audience on a broader platform. ”

Social Cinema is a nonprofit organization with the mission of helping disadvantaged youth express themselves through filmmaking.

During the upcoming election cycle, it is Social Cinema’s goal to increase the number of Millennials and Gen Z’ers who vote.