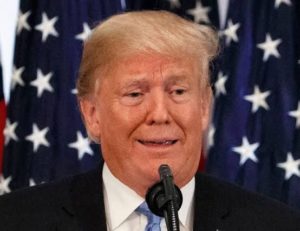 A lot of people have been predicting that something like this would happen, but I have been holding out hope that they were wrong. I was hoping that fascism would never come to America. We know that this president is capable of, he has already shown us who he is. (Remember what happened on June 1st? ), but we were hoping that there were those around him who would try to temper his fascist urges. Man were we wrong.

The events in Portland, Oregon over the past few days should terrify every red blooded American. Imagine unidentified federal agents snatching up peaceful protesters from the streets of an American city and throwing them into unmarked cars. It doesn’t get any more dystopian that that. And yet that is exactly what has been happening in the Northwestern city.

Mr. trump, who is way down in the most recent polls, has become more desperate with each passing day. His back is against the wall and there is no telling what he will do at this point to hold on to power. He has already said that he isn’t sure if he will go peacefully into the orange night. Things could get ugly here in America.

Just today Mr. trump threatened to send his federal officers  into other American cities. (At least I think they are officers. Frankly, I don’t know what they are.)He named Oakland, Chicago, Philadelphia, and Baltimore as examples. Even though, for the most part, protests in these cities have been either non-existent or peaceful of late. But let’s not kid ourselves, we know that this is all about. Just look at the racial makeup of these cities. I am proud today that our leaders in may urban cities are not buying into Mr. trump’s shenanigans.

“Both Mayor Jim Kenney and District Attorney Larry Krasner criticized Donald Trump after the President said he may send federal law enforcement to Philadelphia and other cities run by Democratic leaders in order to deal with continued unrest and protests over police brutality.

“My dad volunteered and served in World War II to fight fascism, like most of my uncles, so we would not have an American president brutalizing and kidnapping Americans for exercising their constitutional rights and trying to make America a better place, which is what patriots do,” Krasner wrote.

“Anyone, including federal law enforcement, who unlawfully assaults and kidnaps people will face criminal charges from my office. At trial, they will face a Philadelphia jury. It’s the least we can do to honor those who fought fascism, including those who are fighting it even now.””

The irony of all this is that some of these Second Amendment right-wingnuts who are so strongly into states rights, and who despise the federal government infringing on their rights, have been silent about Mr. trump’s latest use of federal troops. Can you say Ruby Ridge boys and girls? Which just goes to show you that their movement is not about protecting the Constitution, it’s about, at least in this case, protecting Donald trump.