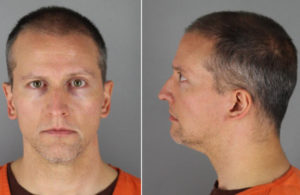 [Editor’s note: Former Minnesota police officer Derek Chauvin is scheduled to stand trial for the second-degree murder of George Floyd on May 25th, 2020. A three-judge appeals panel of the Minnesota Court of Appeals has ordered a Minnesota judge to consider charging Chauvin with third-degree murder — a charge which was previously dismissed by Hennepin County District Judge Peter Cahill in October — in addition to his other charges.]

“It’s upsetting to see all the wire and barricades,” said Mary Moriarty, former Hennepin County Chief Public Defender, in reference to the city’s preparations for the trial of Derek Chauvin. “I think many members of our community view it as some kind of a reflection on them. Some perceive it as a message on how they [the city] think the verdict is going to come out. I wonder what message they are trying to send when the majority of the public protest was peaceful.”

The middle of downtown Minneapolis looks like a war zone.

In the run-up to the Chauvin trial, it appears the City has prepared for every possible contingency. Preparations include barricades, barbed wire, moats filled with razor wire, fences, concrete barriers, and boarded-up offices and storefronts. The city has also enlisted the help of over 1,000 fully armed law enforcement personnel from dozens of nearby agencies, 2,000 national guardsmen, dozens of grief counselors, trauma counselors and it is offering $175,000 contracts from the Office of Violence Prevention to qualified applicants.

The downtown federal building, Minneapolis City Hall and the Hennepin County Government Center have been completely fenced off. People have to enter through gates to get to the Government Center for services. Downtown Sixth Street between 3rd and 4th Avenues is completely shut down.

Some see the over-preparedness as a kind of “violence baiting.” Violence baiting is like Red-baiting in that its intent is to discredit the validity of a political opponent and the opponent’s logical argument by accusing or inferring that an individual or group is violent or sympathetic to violence.

The city’s preparations in anticipation of violence can serve to infer or imply that the community—specifically the Black community—and those who protest against police violence do not have a legitimate cause, but rather are prone to violence and intend to use the trial as an excuse to be violent.

Much like how those who opposed Jim Crow were Red baited in an attempt to discredit the validity of their opposition to racism and segregation, violence baiting is used to discredit the movement against police violence.

It is highly disturbing that City, County and State officials would go to such extreme lengths to limit our right to peaceably assemble outside of the Hennepin County Government Center,” said Nekima Levy Armstrong of the Racial Justice Network in an interview with the Minnesota Spokesman Recorder.

Levy Armstrong last week took part in a press conference along with other anti-police violence activists groups denouncing the City’s draconian preparations in anticipation of protests surrounding Chauvin’s trial for the second-degree murder of George Floyd last Memorial Day. They also criticize what they see as the City’s continued failure to hold its police accountable.

“It is outlandish that they are encircling themselves in barbed wire, in fences,” said Michelle Gross of Communities United Against Police Brutality at the press conference. “They are more afraid and concerned with the people than they are with police violence.

“They want to make it seem like the protesters are violent and that they are the problem, not the police violence that led to the protest. What they should do is put this razor wire around the precinct so they can keep the cops inside who are brutalizing us,” said Gross.

Levy Armstrong said the preparations did not make her feel safer. “We do not believe the police will be here to protect the people. White Supremacists flooded the Twin Cities. They terrorized people in North Minneapolis, shot at and shot Black people, and they were not held accountable.” She pointed out that it was the police who were violent with those peacefully protesting.

“This is not how you demonstrate care for a city traumatized by police violence,” tweeted Minneapolis Fifth Ward Councilmember Jeremiah Ellison. He added that the city council “did not approve this plan, and I certainly don’t personally approve of it.”

Activists added that while the City was trying to intimidate them, they were concerned that the City was not doing all it could to prevent another George Floyd. Nor they say has it come up with a plan to discipline wayward cops who are reported for misconduct.

“I am hearing people talk about how expensive all this is and how that could be used for people who are in economic crisis,” said Moriarty. The State of Minnesota has allotted $35 million for security during the trial.

“In the nine months since George Floyd was killed, not one thing has changed,” said Gross. “They do not want to change the underlying cause of our complaints. City Hall has done nothing to address the problem of police violence.

“Last summer many people were harmed by police in response to the uprising. Five people lost eyes and others lost limbs and broken ribs. And we are the problem? I don’t recall any of us firing projectiles at the cops.

“Their [police] violence is the core of the problem,” Gross continued,” and this City and this State have not addressed the conditions that led to George Floyd being killed, which tells us that we will surely have another George Floyd.”

The city had planned to pay what they called social media influencers to broadcast information to the various BIPOC communities during the trial. But after public outcry the idea was pulled earlier this week.

Minneapolis officials had said they wanted to make sure that “we get the word out about what’s happening with the trials and what the options are for community to engage.” But activists and others complained that it felt like the City was using social media influencers to do just that, attempt to influence the public’s perception of the trial.

Trial to be livestreamed

People will get to see the proceedings themselves as Court TV will live-stream the trial. The City has also mobilized legal professionals to help the community better understand the process. Moriarty said people would need little help figuring out the process: “At the end of the day, people know right from wrong.

“I remember thinking the Government Center is a public building. I remember feeling terribly we are there to help the public, and downtown is sending the message that the public is dangerous,” said the former public defender.

“We will be out here protesting to ensure that the City knows it has an obligation and the responsibility to end police violence,” promised Gross.

“He [Chauvin] deserves to spend time in prison for lynching a Black man in broad daylight under the guise of law and order,” said Levy Armstrong. “Likewise, the same officials who ordered the fences, barbed wire and barricades should also be held responsible for looking the other way while Minneapolis police were beating and killing people all of these years.”