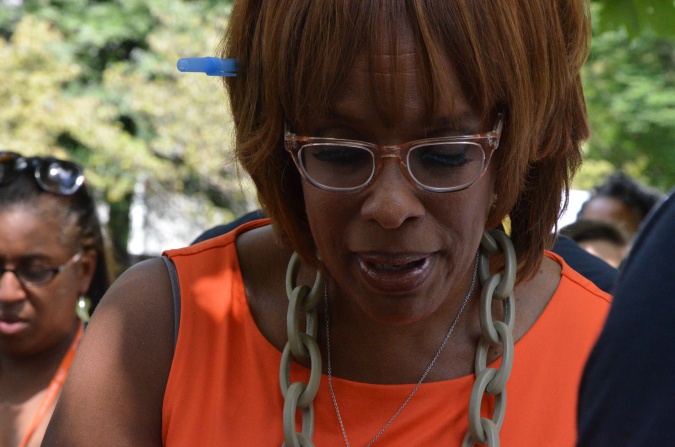 We got it wrong, and we owe Gail King a major public apology.

While thankfully the media company I work for which includes the Atlanta Daily World, the Atlanta Tribune, the Chicago Defender, the Michigan Chronicle and the New Pittsburgh Courier didn’t delve in the darkness of the social media frenzy that all but consumed popular news anchor of “CBS Morning News”  morning, Gayle King, because we are committed to responsible journalism. Disappointingly, a cluster of too many armchair commentators didn’t do the same.

King has been villainized over the past few days for asking Bryant’s longtime friend and WNBA star Lisa Leslie about his 2003 rape case. The interview with Leslie included a brief segment on rape charges leveled against Bryant in 2003 which concluded with the charges being dismissed (as King repeated in the interview} against the NBA legend in 2005. But how could King not ask the question? Even the death of a legend like Bryant, involves some scrutiny of the facts which may be dismissed due to his tragic demise … but not erased.

Unfortunately … or not, the real villains in the Gayle King interview controversy with Leslie who had the opportunity thanks to King to defend the deceased NBA star, are the CBS network zealots who decided it was worth King’s image and reputation with the public to exploit and savor a salacious moment to bump ratings and even feed her to the wolves … the public.

But while King, a venerable and popular journalist revered for her ability to put the spotlight on the human element in her on-air reporting has been raked over the coals for asking the about the issue, so many have decided to turn a blind eye and bury any less than stellar memories on the road to Kobe Bryant’s divinity in death. The world loved him … including me and Gayle King, but remember Bryant is not up for sainthood.

I remember back in the day sitting around my dining room table engaging in animated and at times heated discussions about the rape allegations against the Lakers’ star player. And I remember the props we all gave Kobe when he apologized to his wife Vanessa and presented her with “the apology ring” to make up for his indiscretion and publicly announce his commitment to wife and family.
And the matter was forgiven … not forgotten.

Gayle King and Kobe Bryant are two African-American stars and now household names who are part of the fabric of our culture. Kobe Bryant’s tragic death at the age of 41 has left millions across the globe reeling and mourning the loss of a great athlete, activist and humanitarian. Count Gayle King among the most sincere of those mourners.

“I have been with Kobe Bryant on many social occasions. He was very kind and very warm to me and I felt we had a friendly relationship. I too am mourning his loss just like everybody else. I still am shocked by it. It’s tragic and untimely and the last thing I would want to do is disparage him at this particular time … and that’s why I’m taking this time to speak to you directly,” King said in a social media post. “I don’t want to sit up on a set and read a prepared remark. I wanted you to hear exactly where I’m coming from and how I’m feeling, and to let everybody know that no disrespect intended … I thank you for listening.”

And while CBS News said in a statement that King “conducted a thoughtful, wide-ranging interview” with Leslie but the clip that was posted “did not reflect the nature and tone of the full interview,” this really small and inadequate attempt to right the wrong is more about damage control than an authentic apology to King and viewers.

“We are addressing the internal process that led to this and changes have already been made,” a spokesperson added in Thursday’s statement.

The entire event is more than an extraneous mess to keep the network in front of a story, it’s a media disgrace and a statement on the ills of major media and social media users going off half-cocked and ready to fire.

Anybody ever heard the infidelity accusations leveled against Dr. Martin Luther King? Did those charges change his status as a world leader and “drum major for justice?”

This is actually a real-life real-time teachable moment … don’t shoot the messenger.

Speaking of shooting … the death threats? Is King an advocate for the black community and culture only as good as one distorted segment?