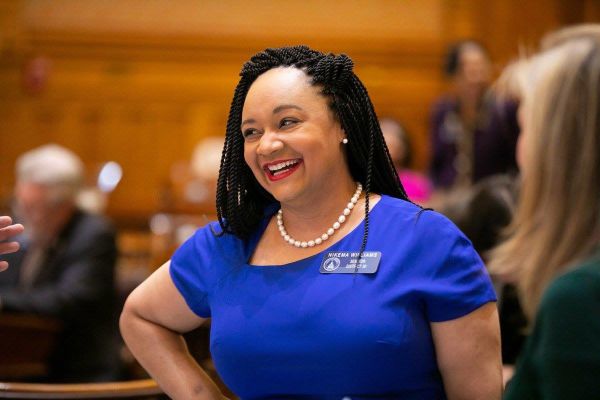 As Joe Biden rolled out his women’s agenda, the Democratic Party of Georgia released the following statement:

“Trump has a history of saying he respects women, but his actions tell a completely different story,” said Democratic Party of Georgia Chairwoman and state senator Nikema Williams. “Throughout his presidency, Trump has repeatedly acted to undermine women’s access to health care, equal pay, and paid family leave, breaking key campaign promises to Georgians. We deserve so much better. Fortunately, Joe Biden has a strong record of fighting for our values and Georgia women will show up in November to elect him as our next president.”

Democratic Party of Georgia chairwoman Wiliams added: “Trump has shown his contempt for women time and again, including his dangerous attempts to eliminate the Affordable Care Act which would strip health care coverage from tens of thousands of Georgians and bring us back to a time when being a woman itself was considered a pre-existing condition,” said Rep. Bee Nguyen, Vice Chair of the Democratic Party of Georgia. “It’s time to elect a president who will be a real leader on women’s health. Joe Biden will champion improving women’s health and our access to health care, and reverse the Trump Administration and states’ all-out assault on women’s rights.”

As he campaigned all across the country in 2016, Trump vowed to “do more for women than anybody else” and specifically said he would support women’s health issues.
Trump is aiming to have the entire Affordable Care Act struck down, which would bring a return to the days when insurers could charge women more and did not have to cover maternity care. [New York Times, 6/26/20]
Trump revoked protections against workplace sexual harassment and pay disparities. “On March 27, Trump revoked the 2014 Fair Pay and Safe Workplaces order then-President Barack Obama put in place to ensure that companies with federal contracts comply with 14 labor and civil rights laws.” [NBC News, 4/3/17]
Trump’s administration rescinded Obama-era campus sexual assault guidelines and narrowed its definition of sexual harassment.
Trump promised to “solve” the “big problem” of child care, saying “‘we’re going to solve that problem. That means we need working mothers to be fairly compensated for their work and ensure they have affordable quality child care for their kids.’” [U.S. News and World Report, 9/13/16]

The Trump tax bill reduced the value of the child and dependent care credit for many working families, while handing massive giveaways to billionaires and corporations. [Elaine Maag, Tax Policy Center, 11/27/18]

Infant care in Georgia costs 15.6 percent more per year than in-state tuition for four-year public college. According to the U.S. Department of Health and Human Services. child care is affordable if it costs no more than 10% of a family’s income. By this standard, only 37 percent of Georgia families can afford infant care.
At a White House Summit on Child Care and Paid Leave, Trump said “and as a candidate for President, I pledged to advance paid family leave. With this important step, we are delivering. And we are really delivering like nobody has, I think, ever delivered before.” [Trump remarks, 10/12/19]
The Trump administration scaled back paid leave requirements for employers under COVID-19 relief legislation, Exempting Small Businesses With Fewer Than 50 Workers. [New York Times, 4/2/20]
Trump’s family leave proposal forces parents to “borrow from their future selves,” fails to cover care for sick family members or protect parents’ jobs while on leave.