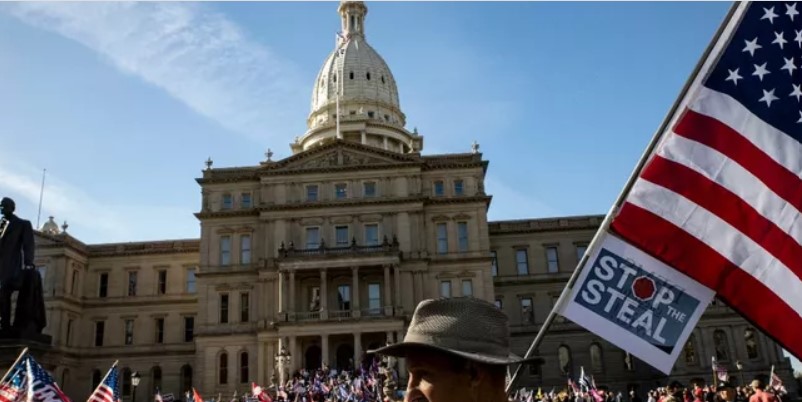 A GOP candidate in Michigan is coming under fire after saying he tells his daughters to “lie back and enjoy it” if rape is “inevitable.”

Robert “RJ” Regan is running for the Michigan House of Representatives and made the remarks on a Facebook Live broadcast recently while discussing how to decertify the 2020 presidential election. Last week, Regan won a special primary election in the state’s 74th district.

“Having three daughters, I tell my daughters, ‘Well, if rape is inevitable, you should just lie back and enjoy it’” Regan said about 10 minutes into the Facebook Live, according to The Huffington Post. “That’s not how we roll, that’s now how we won this election.”

“That was a shameful comment,” one of the attendees said. The host, Adam de Angeli laughingly said afterwards that the livestream might not go “for much longer after what Robert said.”

“I tell my daughters, ‘if rape is inevitable, you should just lay back and enjoy it,” says RJ Regan, the GOP candidate for #mileg’s 74th statehouse district. This man is disgusting. This is the kind of candidate the GOP has embraced in Michigan.pic.twitter.com/lvosF5h2XC

Regan won his election by just 81 votes but lost the same race in 2020 after one of his daughters tweeted that the public shouldn’t vote for him.

De Angeli attempted to defend Regan, claiming that he was trying to explain what “not to do.” Regan didn’t stop there, though. He went on to defend Russian President Vladimir Putin, stating that the deadly invasion he’s leading is because Putin said, “I have to protect my country, I have to protect my children, and I can’t count on the United States.’”

In a statement to Fox 17, Michigan Republican Tori Sachs of the Michigan Freedom Fund condemned Regan.

“RJ Regan’s disgusting and dehumanizing comments on the horror of sexual assault along with his support of murderous dictator Vladimir Putin are despicable and completely disqualify him from holding public office,” Sachs said.

“RJ Regan doesn’t belong anywhere near the state Capitol, and that is why we endorsed and supported his opponent.”

Regan is set to face off Democrat Carol Glanville in a special election on May 3.

The post GOP Candidate Tells Daughters To ‘Lie Back And Enjoy’ Rape If It Happens appeared first on Atlanta Daily World.