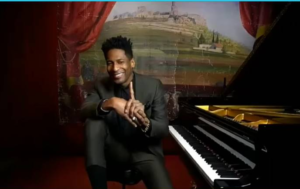 Jon Batiste, musician and bandleader from The Late Show with Stephen Colbert joined SiriusXM Urban View’s “The Karen Hunter Show” to discuss his new album “We Are” which is out on March 19.

During the interview he spoke about his musical mentors including Stevie Wonder, what he learned from attending school at Juilliard, what it’s like being a black man in America in the public eye, and the importance of being your authentic self:

“You have it in you..it’s in you from the beginning, when you go to these places, you’re just adding to it. Stay with the swag, and the energy, and the spirit of what you came there with. I faced a lot of situations where I learned a lot, and other situations where I could tell I was the first version of this type of person that they had seen, and coming into the space I had to figure out how to be myself without actually breaking down and reforming into what they thought I should be. And I realized that in my journey and that was the most powerful thing that I could realize because that’s the reason for any success that I’ve had, and success that I will have in the future is that authenticity and sticking to who you are and what you are.

Every year I learn something new.. I learn something about how to be a person who’s representing so much of the greatness of what we come from because you inevitably are representing it being in the public figure, being in peoples living rooms every night, being in that space. Anything with a platform you have a certain responsibility. So, I think it’s just more about knowledge of self, and knowledge of where you come from, reading a lot, understanding where things were before you got there, and where you want to take them because then you have the agency to be like ‘ok, well maybe this has never been done, or maybe this has never been the case, but I want to make it the case for this generation so that then the next generation they have even more options.’ And there’s so many little things..it could very little things, it could be wardrobe stuff, it could be the way that I’m lit..little stuff is really the big stuff. Nuances of being in the public. And then just knowing what words you want to say and how to present yourself and how to present what you are all about and being authentic to yourself..the priority is to be authentic.”

During the interview, host Karen Hunter asked: “When people pick up “We Are” what is it that you want them to feel?”

“I don’t believe in genres. I believe in feelings, and culture, and people’s spirit coming through it and I hope people feel my spirit and my story. And also they feel the greatness of all of the people who’s shoulders that I’m standing on. They feel the weight of that lineage, and I just want them to feel love, joy and community. That’s it,” Batiste replied.