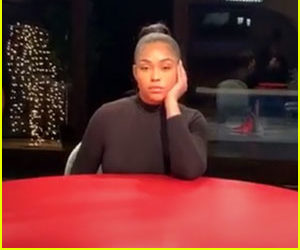 The lie detector video aired on the “Red Table Talk” year-end special, but was actually from Woods’ initial interview with Jada in March. That sit-down took place just after Jordyn was accused of cheating with Khloé Kardashian’s boyfriend Tristan Thompson. Woods passed the test.

Jordyn, whose late father worked on “The Fresh Prince of Bel-Air,” told Renee about having the support of the Smith family.

“It’s crazy how life comes together … The support from everyone is amazing, and I’m sure if there is any advice or anything that I need they’re just a phone call away.”

Woods is not speaking directly about what transpired between herself, Tristan, and the Kardashian family, but she did reflect on the past year. “The longest, shortest year of my life,” Jordyn said. “It’s been a year of growth, a lot of learning… But that’s what life’s about, I feel like it’s about learning and growing, life experiences teach you so much.”

The star went on to say, “It’s been fun, it’s been stressful, it’s been the greatest teacher ever.”

Woods is focusing on working, starring in the new BET movie “Sacrifice.” She told Renee of her character, “She’s a superstar who gets caught up in a kind of domestic relationship with abuse. She ends up in the hospital and everyone is trying to figure out exactly what happened because she is in a coma.”

Jordyn stars alongside Paula Patton, who plays an entertainment lawyer investigating the case. Jordyn said of Paula, “She is a natural. She is so sweet. She comes on set and literally says hello to everyone.” The 22-year-old added, “When it’s your first job and you are working alongside people like her, it makes everything so much better.”