Malik Hawkins keeps fighting for Baltimore – and for himself 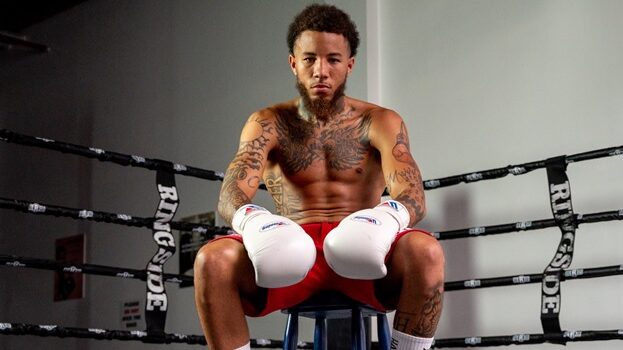 After Malik Hawkins was bullied as a nine-year-old, his parents thought it made sense for him take up boxing. Now 24, the rising prospect from West Baltimore stands on the cusp of stardom in the sport.

After winning all 18 of his fights — 11 by knockout — Hawkins will face his toughest test against Subriel Matias of Puerto Rico on Oct. 10. Showtime will broadcast the bout from Mohegan Sun Casino in Uncasville, Connecticut.

Taking up boxing in response to bullying is not unusual. Muhammad Ali, arguably the greatest heavyweight champion of all time, took up boxing as a child after his bike was stolen when he was a child.

Boxing enabled Hawkins to stay focused on life’s positive aspects. He won his first amateur title at 15, the National Golden Gloves. Hawkins also won several other amateur titles when he began to see boxing as a way to escape Baltimore’s dangerous streets.

“It was eye-opening to see that boxing could take me places, and here I was winning a national title,” he said. “I had never left Baltimore until I went to Washington, D.C. to spar.”

At six feet tall, Hawkins is above the average height of fellow super lightweight fighters. He shrewdly made the division’s weight limit by half a pound in his last fight in December and used his height to his advantage in the ring.

Hawkins draws inspiration from fighters such as Roy Jones Jr. who used his ring generalship and boxing IQ to skillfully defeat his opponents. Hawkins says he also learned a lot from 1980s boxing legend Thomas Hearns — another fighter whose height advantage helped flourish in the ring. Above all, Hawkins considers Floyd Mayweather Jr. an influence on his style and approach to boxing.

Thus, Hawkins was amazed and honored that Mayweather Promotions took an interest in his career. The company’s CEO, Leonard Eberle, signed the rising fighter after seeing him box at the Royal Farms Arena in 2019. The signing has allowed Hawkins to meet Mayweather several times.

“Floyd is cool. He has given me some defense tips. The less damage you take in this sport, the longer you last — that’s one of his key messages.”

After dominating in the ring as a fighter, Mayweather is trying to achieve similar success as a promoter. Hawkins thinks Mayweather is well on his way.

“Mayweather Promotions is about building tremendous relationships — and they have given me advice not just in boxing, but outside the ring, where it is harder to stay focused and to treat this like a job,” Hawkins said.

Hawkins’ bond with WBA Regular lightweight world champion Gervonta “Tank” Davis has aided his rise. The two have been close friends since the second grade. Before they became boxers, they enjoyed pickup football — although Hawkins remembers Davis would sometimes start moving before the snap, and the two would often pull pranks on each other.

“I used to walk in the gym with aluminum foil in my mouth and act like they were grills,” said Hawkins, who earned the nickname “Iceman” because of his passing resemblance to the rapper Paul Wall and for his cool demeanor in tough situations.

Hawkins says that even at a young age Davis told him he was going to be a world champion, a compliment that Hawkins returns when he is asked for a statement about Davis.

“Of course, Malik is going to be a world champion. He is around a world champ daily, and we feed off each other. It’s in the blood,” Davis said.

Both men remain proud products of “Charm City”. One of America’s oldest cities, Baltimore ranks 30th in U.S. population. However, in recent decades, poverty has been one of Baltimore’s biggest challenges. Some 23.7% of the population lives below the poverty line, compared to fewer than 14% nationwide, according to the U.S. Census.

Hawkins’ brother and friends were victims of violent crime in Baltimore, which over the years has drawn the interest of filmmakers and also served as the backdrop for HBO’s hit series “The Wire.”

“Everything I do, I do it for my city. I am proud to be from Baltimore,” Hawkins says. “Because of the way Baltimore has been shown over the years, there has been a lot of focus on the negativity in Baltimore. With my career, I want people to have something to be proud of when they say they are from Baltimore.”

When Hawkins hasn’t been in the ring, he has shared this spirit with a small group of Baltimore youths he is tutoring and mentoring; coincidentally, not all of them want to be boxers. He also speaks at local elementary schools in Baltimore and has been active with the “Rock the Vote” campaign.

Hawkins’ many tattoos tell stories from those streets. On one hand reads “Ronald,” a close friend and fellow boxer who died in 2011.

“We have it all in Baltimore. I have seen everything — murders, drug dealing, people I was close to going to jail. In my case, boxing saved my life.”

There is more space for tattoos — space Hawkins hopes to fill with positive works of art. He dreams of fighting in New York’s Madison Square Garden and winning a world title in 2021.

However, he is not looking past his upcoming challenge against Matias, who has won 15 of his 16 pro fights — all via knockout.

Hawkins has chosen to train for his next fight in Frederick, Maryland to improve his focus and escape Baltimore, where he is increasingly well-known and has a large social media following. His training camp has also included the chance to spar with welterweight prospects such as Jaron “Boots” Ennis and Jalil “Major” Hackett.

“What keeps me going is the younger generation,” Hawkins said. “They look up to me, and they want to be like me. Growing up, I made a choice, but I never had anyone in my community that I could relate to. I saw the hustlers in the street, and I knew I didn’t want to be like that.”

The post Malik Hawkins keeps fighting for Baltimore – and for himself appeared first on Zenger News.

The post Malik Hawkins keeps fighting for Baltimore – and for himself appeared first on Atlanta Daily World.