NAACP Calls for the House of Representatives to Begin Impeachment Proceedings 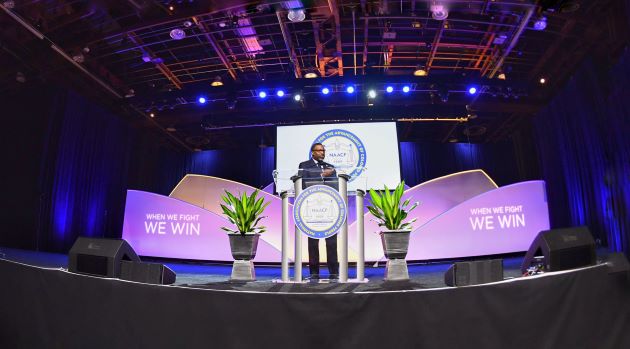 During its 110th National Convention at the Cobo Center in Downtown Detroit, the NAACP — the nation’s oldest and largest civil rights organization — hosted delegates from all over the country. In keeping with the convention’s theme, “When We Fight, We Win,” the NAACP national delegation voted on a resolution to initiate Articles of Impeachment against President Donald J. Trump.

NAACP President Derrick Johnson, who has remained unwavering in his opposition to the president and his administration’s policies, gave the following remarks to the delegates shortly after the vote was cast.

“The pattern of Trump’s misconduct is unmistakable and has proven time and time again that he is unfit to serve as the president of this country,” said Johnson.

“From his attempts to curtail the scope of Robert Mueller’s investigation, to calling out minority congresswomen and telling them to go back to their countries, to caging immigrant children without food or water, to his numerous attempts to avert the Supreme Court’s decision to not add in the citizenship question to the 2020 Census, this president has led one of the most racist and xenophobic administrations since the Jim Crow era.”

“Trump needs to know that he is not above the law and the crimes that he has committed, and he must be prosecuted. We will make sure that the NAACP is at the forefront of pushing Congress to proceed with the impeachment process,” Johnson continued.

Tonight’s vote was the organization’s latest effort to encourage members of Congress to pursue impeachment against the president. Rep. Al Green (D-TX) energized the delegates, delivering remarks similar to those that launched his efforts on the floor of the House of Representatives, where he has put forth several impeachment measures.

Carmel Henry, a millennial voting delegate from the District of Columbia, believes that even if the vote won’t have any legislative ramifications, the resolution represents a step in the right direction.

“I support the resolution passed by the organization during its 110th convention because it represents a closer step in addressing the injustices in America, particularly as it pertains to minorities and persons of color,” Henry said.

The NAACP’s vote comes one day before former special counsel Robert Mueller is set to testify before Congress, which many Democrats hope will help strengthen the argument for impeachment among the legislators whose views differ from the 87 House members currently on record as expressing support for an impeachment inquiry.

While addressing attendees during Monday’s events, Rep. Rashida Tlaib (D-Mich.), one of the four freshman congresswomen who President Trump offensively told to “go home,” a statement many believe to based solely on her ethnic background — Talib was born in Detroit — repeated her call for his impeachment, saying “I’m not going nowhere. Not until I impeach this president.”

Speaker Nancy Pelosi (D-Calif.), who also spoke at the convention Monday, did not mention Trump during her speech.

The post NAACP Calls for the House of Representatives to Begin Impeachment Proceedings appeared first on Atlanta Daily World.