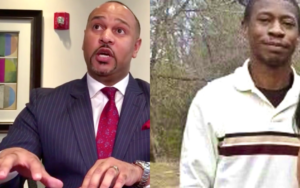 Brooklyn, NY – Carlos E. Moore, the attorney representing the family of
Harvey Hill, is suing Madison County, Sheriff Randy Tucker, and others who are responsible for the beating death of inmate Mr. Hill in May of 2018.

On May 5, 2018, 36-year-old Harvey Hill was in John Finnegan’s front yard, his former employer who he was still friends with. While laughing at the sky as it rained, Finnegan called the police.

When an officer arrived, rather than give Hill a mental evaluation, he was immediately arrested and charged with trespassing.

On May 6, 2018, Hill’s condition did not get better as he went into a rage at the Madison County Detention Center, throwing a checkerboard and hitting a guard with a lunch tray. Reuters, an international news organization who first reported this case, reported that Hill’s family believes that he was suffering an emotional breakdown.

Three guards tackled Harvey Hill, pepper-sprayed him and repeatedly kicked and punched him in his head. After Hill was handcuffed, two guards slammed Hill into a concrete wall, newly released surveillance video from Reuters reveals.

Hill was led to a shower, away from cameras, where they continued beating Hill who was incapable of retaliating force. The guards falsely accused Hill of being combative and exhibiting strength that justified their force.

He was assessed by a licensed practical nurse without being given medication. Instead, Hill was sent to an isolation cell where he would later take his final breath.

On May 7, 2018, a guard pinned him down to the floor and removed his handcuffs. Hill then crawled to the toilet and became unresponsive. For 46 minutes, no one checked on him.

An autopsy later ruled Hill’s death a homicide, according to Moore.

No one has been charged for his death. “One of the guards is still employed by Madison County,” Moore said.

In February of 2019, Moore and Hill’s family filed a lawsuit against Madison County, Sheriff Randy Tucker, and multiple jailers alleging that they violated Hill’s rights by beating him, pepper-spraying him, and throwing him into a cell without proper medical assistance – all while handcuffed. Moore said the U.S. Department of Justice Civil Rights Division has been examining the circumstances of the death.

Moore confirmed to the Clarion Ledger that he has been in touch with the DOJ and is handling over depositions he took of Madison County employee witnesses.

Moore released an official statement, “While the family is happy about the settlement, they will not rest until the perpetrators who killed Harvey Hill are arrested and convicted for the crimes they committed.”