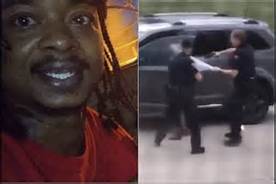 A police shooting in Kenosha, Wisconsin has ignited resident rage and protests.

A man, identified as Jacob Blake, is in serious condition at a Milwaukee-area hospital after he was shot by police officers responding to a domestic violence call late Sunday afternoon in Kenosha Wisconsin.

More than 60 people were gathered following the shooting at the scene with several saying that the Black man was trying to break up a verbal altercation between two women shortly after 5 p.m.

According to a police department press release, Kenosha police were sent to the incident at 5:11 p.m. and were subsequently involved in an officer-involved shooting.

According to the release, officers provided immediate aid to the man, who was transported via Flight for Life to Froedtert Hospital in Wauwatosa, WI.The man was in serious condition. Police radio traffic indicated that a landing zone was established at Bradford High School just before 5:30 p.m. and the man was then transported.

The incident was being turned over to the Wisconsin Department of Justice, Division of Criminal Investigation, which will be investigating the officer involved shooting.

At least a half dozen witnesses said that the man had tried to break up a fight between the two women outside a home at 2805 40th St. and that police had attempted to use a taser on the man prior to the shooting. Then, they heard at least seven gunshots ring out.

Witnesses said he was unarmed and shot in the back.

A video that has since gone viral on social media shows the man walking away from officers and going around the vehicle to get inside. While the man is entering the vehicle the video shows an officer firing a gun at the man inside the vehicle. A woman in the video is screaming as he is being shot. There were reportedly children in Blake’s car.

It was not immediately known whether the man had a weapon.

Residents who live across the street from the residence said while they have heard gunfire in the neighborhood before, never that close until Sunday.