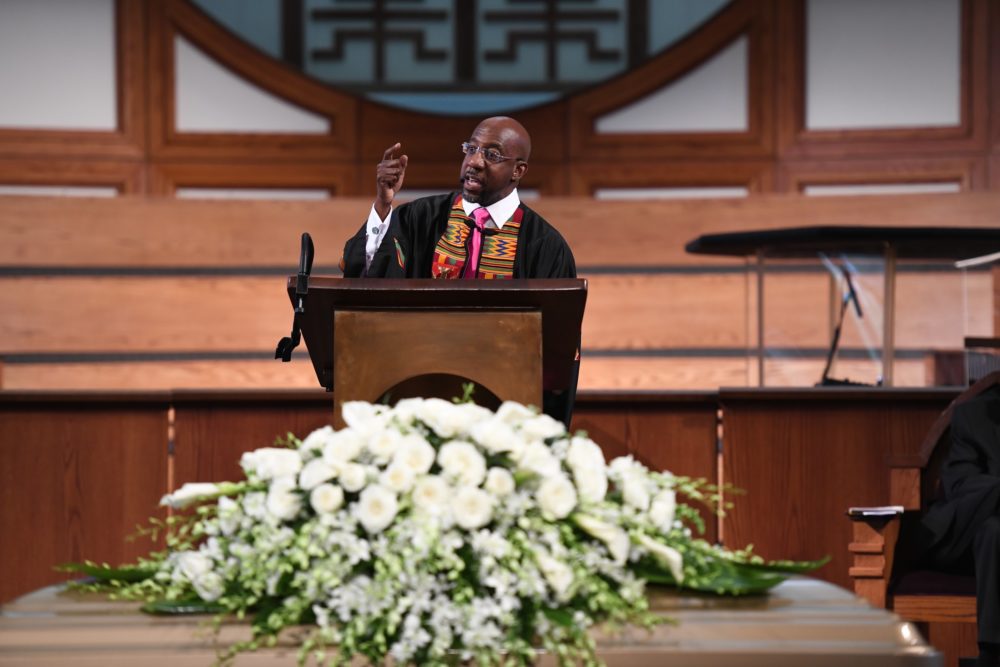 Brooks’ family selected Ebenezer Baptist Church for the private funeral service because of its global historic presence. “We’re here to provide ministry as they walk through the valley of the shadow of death,” said Rev. Raphael G. Warnock, Senior Pastor of Ebenezer. “It’s Ebenezer’s mission to show up in a time like this, especially given the way he lost his life. Rayshard was not a member of our church but his loved ones are a part of our family. We are a sanctuary for the suffering. We are a house of prayer for all people,” he added.

Due to Covid-19, only 200 guests were allowed inside the sanctuary, which was marked for social distancing. Notable guests included Atlanta Mayor Keisha Bottoms, Former Mayor Kasim Reed, Rev. Bernice King, Former Georgia Gubernatorial Candidate Stacey Abrams, Rapper/Actor/Activist T.I. and his wife Tiny. Singers Kelly Price, Yolanda Adams, Pastor Smokie Norful, Actress/Singer Tamela Mann, Kurt Carr & Singers all provided songs of comfort. Rev. Bernice King, daughter of Rev. Dr. Martin Luther King, Jr., addressed the crowd saying “Having a father killed when I was only 5 years of age, my heart deeply grieves for [his daughters] Dream, Memory, Blessing and [stepson] Mekai,” King said. “I know the pain of growing up without a father and the ongoing attention around his tragic loss. I am and will continue to pray for each of you.”

During the eulogy, Rev. Warnock reflected on the time he’s spent with Brooks’ family in the past few days. “I met 8- year-old Blessen, such a sweet and precious child,” he told the congregation. “On the same day her father was killed, they had been celebrating her 8th birthday. What do you do with that when you’re 8-years-old? These precious children of God will need the village to surround them and support them and embrace them and love on them and reassure them that they are not alone.”

Mourners stood solemnly outside to watch the private service stream on a jumbotron. Brook’s death prompted massive protests across the city and around the nation in a climate that has seen the deaths of George Floyd in Minneapolis, MN; Ahmaud Arbery in Brunswick, GA and Breonna Taylor in Louisville, KY. “This country has become too accustomed and comfortable with black people dying,” said Warnock. “Black Lives Matter is just a way of saying ‘see our humanity.’ We’re trying to stay alive and keep our families alive.”

Rev. Warnock also touched on the events leading up to Brooks’ death. “When I heard Rayshard’s story, I understood,” he said. “He was on probation in a state that, despite its reforms, is ground zero for keeping people on probation for extended periods of time. Somebody said, ‘Well why did he run? Didn’t he know…’ Well, sometimes you have to sit where other folk sit in order to feel what they feel. Rayshard was trying. He had been digging his way back. And he knew that night that he could very well lose his liberty. So, afraid of losing his liberty, he lost his life, running from a system that too often makes slaves out of people.”