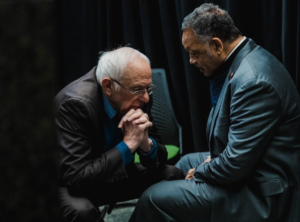 Civil rights icon Rev. Jesse L. Jackson, Sr. announced on Sunday that he is endorsing Sen. Bernie Sanders for president and will speak today at an event with the senator in Grand Rapids, Michigan.

The “Black Firewall” has changed the dynamics of the 2020 presidential campaign.  The question is what has the firewall earned?  What will be the return on the black firewall’s political investment?  And what difference will the political contribution that the firewall is making, make in the individual lives of African Americans and in the African American community?

When President Abraham Lincoln’s back was against the wall he came up with a meaningful proposition – the Emancipation Proclamation. The issuing of that proposition allowed him to free the “colored troops” to fight to save the Union.  And after the Civil War, the colored troops saving the Union allowed the Union to free the slaves and affirm their citizenship with the 13th, 14th and 15th Amendments.  What will the firewall mean for the black community under the leadership of Senator Bernie Sanders or former Vice President Joe Biden in 2021 and beyond?

President John F. Kennedy was slowly gaining concern and understanding of the black community when he was assassinated.  Given LBJ’s background and history it was not easy for the civil rights community to trust him.

But under LBJ the black community and the nation got a 1964 Public Accommodations Act, a 1965 Voting Rights Act, a 1968 Opening Housing Act, a War on Poverty, an Elementary and Secondary Education Act, Medicare, Medicaid, an EEOC, Head Start, a functioning U.S. Civil Rights Commission and more.

We have a right to ask and expect candidates who benefit from the African American political firewall to deliver what we need under the potential leadership of Bernie Sanders or Joe Biden?

With the exception of Native Americans, African Americans are the people who are most behind socially and economically in the United States and our needs are not moderate.  A people far behind cannot catch up choosing the most moderate path. The most progressive social and economic path gives us the best chance to catch up and Senator Bernie Sanders represents the most progressive path.  That’s why I choose to endorse him today.

The Biden campaign has not reached out to me or asked for my support.  The Sanders campaign has, and they responded to the issues I raised and the concerns I expressed with the following commitments:

That’s some of what the firewall needs and that Senator Sanders has committed himself to, and that’s why I can enthusiastically endorse Senator Bernie Sanders today.