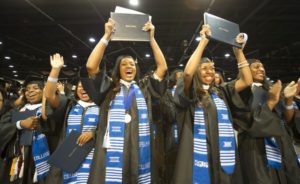 Today, Spelman College announced the public phase of the largest comprehensive campaign in the history of the institution. With a goal of $250 million, Spelman Ascends is focused on the strategic initiatives of increasing financial aid, endowing faculty professorships, funding a technology infrastructure transformation and building a Center for Innovation & the Arts that houses programs in the arts, innovation and entrepreneurship.

In just over three and a half years, hundreds of generous donors have made gifts to Spelman,
resulting in more than $240 million – 96% of the goal – that will support the College’s strategic
priorities:
• delivering on the promise of graduating with a competitive edge every student who
enrolls at Spelman;
• elevating the Spelman difference through support of the College’s extraordinary
faculty;
• enhancing the technology and operational infrastructure;
• and promoting academic innovation by developing new programs and a new academic
facility.

With the campaign not ending until 2024, Spelman is certain to exceed its goal, allowing the
College to pioneer new academic programs and continue to graduate Black women who are
global leaders. An increase in the number of applications from 5,000 five years ago to almost
11,000 for this academic year suggests that the momentum of the campaign is having a
beneficial effect.

“The excellence of Spelman College has significant impact on our global community. The
investment that our generous supporters continue to make to our beloved institution
transforms lives and lifts communities,” said Rosalind G. Brewer, C’84, chair of the Spelman
College Board of Trustees. “Their gifts enrich the experiences of our students, invest in
exceptional faculty and support initiatives that address society’s most pressing challenges. We
are grateful for their magnanimous contributions.”

New academic programs supported by the campaign include the Atlanta University Center for
Art History + Curatorial Studies Collective; the Center for Black Entrepreneurship (in
collaboration with Morehouse College and the Black Economic Alliance); the Institute for the
Study of Gender and Sexuality; Spelman’s participation, in collaboration with Morehouse, Clark
Atlanta University, and Morehouse School of Medicine, in the AUC Data Science Initiative; as
well as a new program to ensure employment and/or continued professional development for
every Spelman graduate.

“We share great appreciation for the ongoing and generous support from those who love
Spelman. Their contributions enable the College to continue its rich history of matriculating
Black women leaders who go on to successful careers in fields such as science, politics, law,
education, entrepreneurship and the arts,” said Mary Schmidt Campbell, Ph.D., president of
Spelman. “Our ability to surround our students with committed faculty, a challenging yet loving
environment and a rigorous innovative academic experience is a direct result of our dedicated
community of supporters.”
Cherished Community

A vital part of that community of supporters has been our Spelman alumnae. They have risen to
the occasion, making nearly $17.5 million in commitments to the College, including via the
25@25 Technology Fund and the Spelman Strong Fund, a crucial bridge between tuition
revenue and actual operation costs. In a show of true sisterhood, there is tremendous
momentum and energy around the alumnae fundraising campaigns for scholarships that honor
Spelman’s seventh and first Black woman president, Johnnetta B. Cole, Ph.D., and political
pioneer Stacey Abrams, C’95.

Contributors to the campaign from Spelman’s board of trustees, alumnae, students, faculty,
staff, volunteers and community shared their reasons for making gifts to the College during a
virtual event announcing the public phase of its comprehensive campaign that was live
streamed today at 2 p.m. EST on Spelman.edu, Facebook and YouTube.
Spelman’s legacy has always been one of movement forward and upward from its start as the
Atlanta Baptist Female Seminary in the basement of Friendship Baptist Church to one of the
nation’s top liberal arts institutions. Her daughters, Spelman alumnae, and the faculty
that teach Spelmanites embrace the core value of aspiring to ascend as leaders in their
communities, professions and across the globe.

This campaign will propel the College even further, setting up the next generation of students,
scholars and administrators to carry-on the tradition of progressive and pioneering innovation
and excellence. Spelman Ascends.