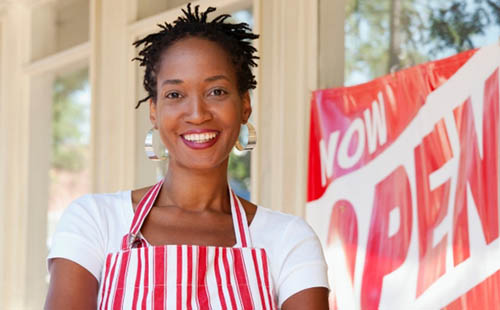 Nationwide — Sharon Steele was once a struggling single mom who suffered from abuse, depression, and she even went to prison. But now she is a successful entrepreneur, motivational speaker, media personality, and the founder of Business Girlfriends – a popular Facebook group for women entrepreneurs.

She has used her personal experiences to develop workshops and programs that have transformed the lives of both men and women, and altered the trajectory of businesses throughout the country and across social media.

She has also been business partners with Gregg Leakes from Real Housewives of Atlanta, and on the tour team with Dr. Venus Opal for The First Black Woman Millionaire Tour.

Currently residing in her hometown of Farmington Hills, Michigan, where all ‘hope for better things’ and ‘shall rise from the ashes,’ this tenacious mother of two is a breathing testimony to the fitting and powerful mottos that are treasured by the people of the Renaissance City.

The travesties from her childhood later had her trapped working tirelessly to provide for herself and her baby girls – one of which had survived from gunfire not once, but five times! It’s no wonder that Sharon would struggle to surface from the deep pits of depression that nearly lead to her attempting to taking her own life.

In the face of such difficulties though, she says that she came to learn to rely on God’s strength rather than her own.

From a struggling single mom with a felony dealing with a diagnosis of severe depression developed from childhood abuse to a entrepreneur, Sharon’s courage and determination has inspired women and men worldwide and helped countless audiences break through, to discover their own untapped talents and infinite potential. Sharon didn’t have options base on her choices which led her to become a business owner but not the typical business. The business wouldn’t be solely product base but actually hands on to help individuals that society would normally reject.

Via Business Girlfriends, she has formed the opportunity for entrepreneurs to be able to gain exposure and assist to help their business or brand by touring across the country hosting business showers. She realizes why many business aren’t able to get a connection as startups or without having a big social media presence. So, she has created these Business Showers that help individuals to engage and connect with other entrepreneurs in their community.

In January 2020, she will kick off the year’s first Business Girlfriends shower in Atlanta. She has already gathered over 2,000 women in her tribe to empower with a teaching of Kingdom Mindset and a sisterhood with determination you can accomplish any obstacles.

Sharon is also working on completing her first book entitled Distract, Denied, Delayed But I Have Destiny. She says this book will bring awareness to our community. She comments, “We are taught not to speak on sexual abuse and the laws in the United States aren’t protecting us from this. My journey and story to give account to how this led me into a dark world of depression and criminal activity. The ones that where supposed to protect me were just as damaged, but through my faith and great leadership and mentors, I was able to raise out of it all.”

She says this book will help families to no longer allow their loved ones to look the other way in fear of rejection. Sharon also hopes to created a documentary series on the journey of felon to entrepreneurship.