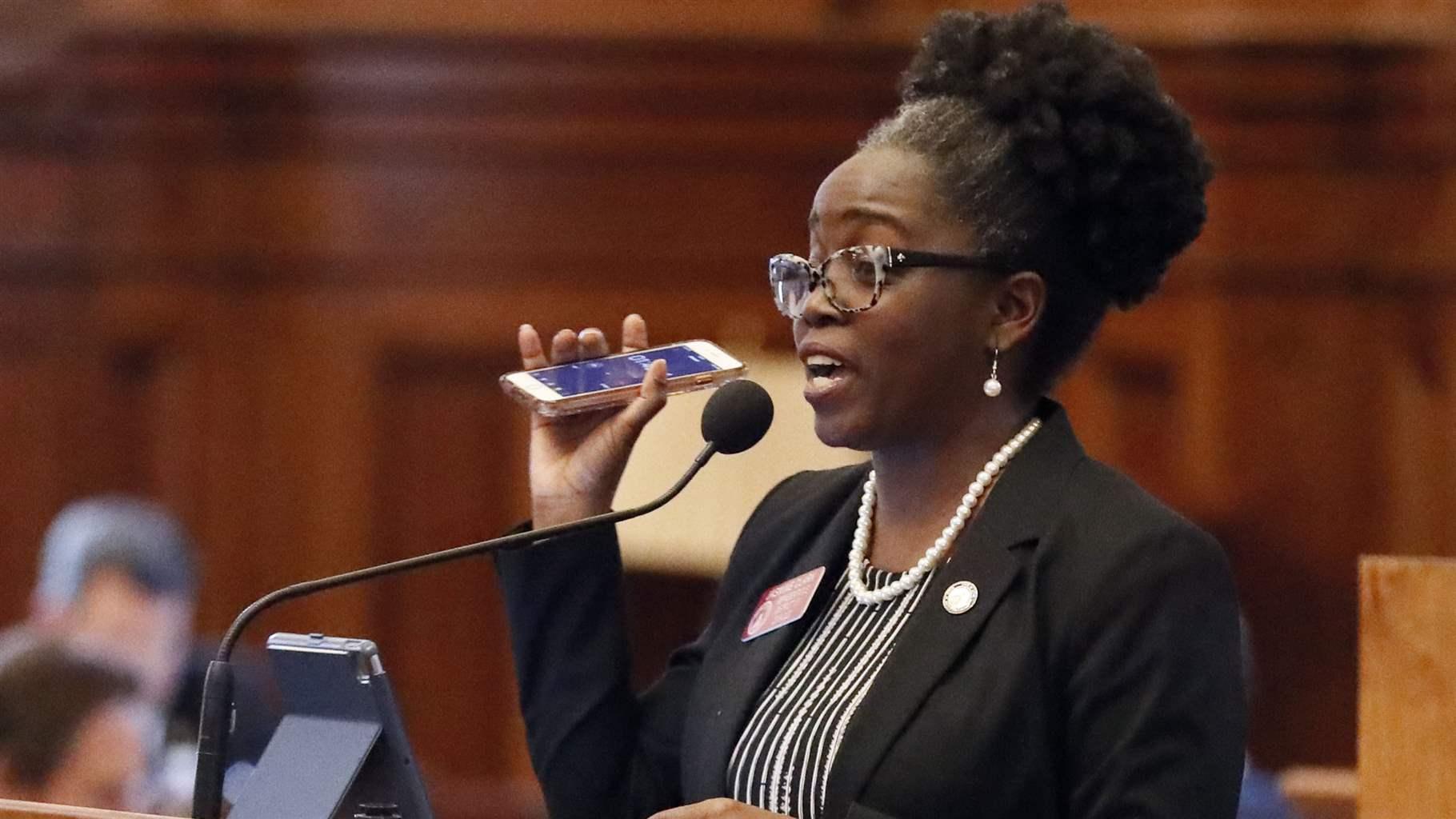 Although they are Georgia natives, state Reps. El-Mahdi Holly and Jasmine Clark are the faces of political and demographic change in their state, as new black residents in the Atlanta suburbs make their mark on Georgia’s Republican-dominated legislature.

Both Holly and Clark are black Democrats who defeated incumbent white Republicans last year for state House seats representing suburban Atlanta. They were part of a blue ripple that left Republicans in control of the Georgia legislature but cost the GOP nine seats in the House and two in the Senate.

The two new lawmakers credit their victories to black newcomers in their districts: Seven of the 10 U.S. counties with the fastest-growing black populations are near Atlanta, according to a Stateline analysis of 2018 census population estimates.

Georgia’s demographic change is most dramatic, but similar shifts are underway in other Deep South states.

South Carolina has seen an influx of white residents. But in the other states of the Deep South — Alabama, Georgia, Louisiana and Mississippi — African Americans are the fastest-growing group of voting-age residents, according to a Stateline analysis of Current Population Survey data compiled by William Frey, a demographer at the Brookings Institution. Since 2010, the region has seen a 14% increase in voting-age black residents, compared with 3% for whites.

Republicans maintain firm control of those states — for now. The GOP controls both legislative chambers and the governor’s office in all but Louisiana, which has a Democratic governor. However, the increase in African American voters — the overwhelming majority of whom vote Democratic — could loosen that hold.

“People go to Atlanta because they hear that black people are doing well there, and Alabama and Mississippi may not have that connotation yet,” said Keneshia Grant, an assistant political science professor at Howard University who has written about black migration and its effect on the Democratic Party.

“I could see the same thing happening in other urban centers in the South, like Houston and Charlotte,” she said. “It might not happen in five years, but over 10 or 20 years it could.”

African Americans also are the fastest-growing group of voting-age residents in Virginia and Wisconsin, according to the Stateline analysis of data compiled by Frey. Meanwhile, in Ohio and Pennsylvania, the black and Hispanic voting-age population is growing as the white population shrinks.

“Higher turnout and the Democratic voting preference of blacks could very well make a difference in many swing states,” Frey said.

Atlanta suburbs such as Henry County, where Holly won election, have attracted black residents seeking warmer climates and a return to their roots — a reversal in part of the Great Migration, when millions of African Americans fled racism in the rural South for greater freedom and economic opportunity in the urban North, Midwest and West.

Henry County’s percentage of black residents (of all ages) grew from 39% to 48% between 2010 and 2018, the largest increase in the nation behind neighboring Rockdale County, which grew from 48% to 59%. Five other Georgia counties made the top 10: Douglas, Newton, Gwinnett, Clayton and Fayette. All had black populations grow more than 4 percentage points.

“People come here because it’s possible to work in Atlanta and have a three- or four-bedroom house in the range of $250,000 to $300,000,” Holly said. The teacher won 57% of the vote in his race against businessman Geoffrey Cauble.

Fourteen seats in the state House representing the Atlanta area flipped from Republican to Democratic. Elsewhere in the state, three seats flipped the other way, and two vacant seats were filled by the GOP.

It’s a concern for the Republican establishment in Georgia, which also witnessed a close governor’s race in which Stacey Abrams, an Atlanta Democrat, came within 55,000 votes of defeating Republican Brian Kemp.

“It is up to our leaders to make sure we have a broader base of support,” said Eric Tanenblatt, a top Republican fundraiser based in Atlanta. “The Atlanta region is attracting African Americans and young people from all over the country, and we lost 14 seats last year, mostly in the suburbs. That is a real challenge.”

Clark said both black and white Republicans have a strong presence in her area, and she had to build a coalition of immigrants and others to win, by taking a stance against English-only laws, for example. While knocking on doors in her district, she encountered many immigrants who spoke only Spanish or Vietnamese.

“I don’t take it for granted that somebody will vote for me because they’re black,” said Clark, a microbiologist in Gwinnett County who defeated Republican Clay Cox, a CEO, in a squeaker, winning by fewer than 300 votes out of 21,000.

Whether Democratic or Republican, politicians in states with changing demographics like Georgia need to be aware of political issues that concern black voters, said Danyelle Solomon, vice president for race and ethnicity policy at the liberal Center for American Progress.

“You need to demonstrate to [black voters] that voting is going to provide a way to improve their lives by finding policy solutions to issues like gun safety and inequality,” Solomon said. “You can’t just go to them at the last minute and ask for support because you’re a Democrat.”

For black Democratic politicians such as Holly and Clark who live in transforming areas, it’s critical to form coalitions with white moderates, Asians and other newcomers, said Roger House, an American studies professor at Emerson College in Boston who has written about black migration and Georgia politics.

“I think that dynamic was in play in the Abrams election but needs to mature,” House said. He added that migration changes may need to happen beyond Atlanta’s bedroom communities for Democrats to make progress in challenging the state Republican establishment.

Change could be faster, House said, if smaller cities like Augusta, Macon or Columbus become destinations for blacks seeking relief from escalating prices around Atlanta. Such towns also might be attractive to black retirees from other parts of the country.

But according to Jeffrey Wright, a University of Georgia demographer who develops population estimates and projections for the state, it won’t be easy to draw working people to Georgia’s small towns and rural areas, many of which are losing population.

“It’s hard to envision an advertising campaign convincing blacks to migrate to some of these low-opportunity areas based on the promise of potentially gaining state political power.”

Redistricting by the Republican-dominated legislature after the 2020 census is likely to make it harder for Democrats, Wright said.

“Statewide offices are going to start to shift soon. Those offices will turn blue first,” he said. “Georgia will be majority-minority in 2025, according to our calculations, but a large number of counties and districts will remain in the hands of white Republicans.”

Source: Stateline is an initiative of The Pew Charitable Trusts

The post There is a Change in Politics With More Black Voters in the South appeared first on Atlanta Daily World.