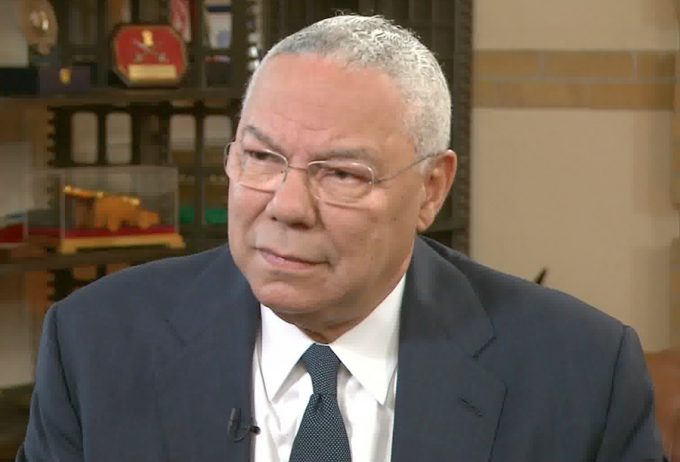 1872—John Henry Conyers becomes the first Black student at the U.S. Naval Academy. However, racism and often violent harassment forced him to leave the academy before he was able to graduate.

1905—The Atlanta Life Insurance Co. is established in Atlanta, Ga., and becomes one of the largest insurance companies in America serving a predominantly African American clientele.

1984—Gen. Colin Powell becomes the first African American named as chairman of the Joint Chiefs of Staff. As the nation’s top military leader, Powell was praised by some Blacks as a role model while he was criticized for supporting what critics considered the government’s war-mongering policies. His generally positive reputation was damaged by his speaking before the United Nations and providing misinformation in 2003 in support of the Bush administration’s war in Iraq.

1863—Mary Church Terrell is born on this day in 1863. She became one of the nation’s leading activists advocating greater education for Blacks and women. She was the first Black person to sit on the Washington, D.C., school board and played a major role in desegregating that city’s restaurants.

1961—The Interstate Commerce Commission officially prohibits segregation in buses traveling in interstate commerce. It also banned segregated terminal facilities even though the ruling was largely ignored in many Southern states. But during the mid-1960s civil rights activists would frequently cite the ruling as they integrated facilities throughout the South.

1926—Legendary jazz great John Coltrane is born on this day in Hamlet, N.C. He is generally credited with reshaping modern Jazz and setting a pattern which would be followed by generations of Jazz saxophonists.

1930—Singer-performer Ray Charles is born on this day in Albany, Ga. Charles pioneered the soul music genre during the 1950s by combining blues, R&B and gospel styles into the music he recorded for Atlantic Records. He also contributed to the integration of country music, R&B and pop music during the 1960s with his crossover success on ABC Records, most notably with his two Modern Sounds albums. While he was with ABC, Charles became one of the first Black musicians to be granted artistic control by a mainstream record company.

1957—President Dwight Eisenhower orders federal troops into Little Rock, Ark., to prevent angry Whites from interfering with the integration of the city’s Central High School by nine Black students. The confrontation was one of the most dramatic during the early days of the Civil Rights Movement. Governor Orval Faubus had vowed to go to jail to block the court ordered desegregation of the school claiming that Whites would be destroyed if they integrated with Blacks. But the confrontation settled the issue of whether states had to obey orders issued by federal courts.

1965—President Lyndon Johnson issues what is generally considered the nation’s first affirmative action order—Executive Order #11246. It required companies receiving federal construction contracts to ensure equality in the hiring of minorities. Despite a disastrous war in Vietnam that would eventually force his resignation, the Southern-born Johnson generally supported a host of legislative and executive efforts beneficial to Blacks.

1861—The Secretary of the Navy authorizes the enlistment of free Blacks and slaves as Union sailors in a bid to help the North win the Civil War against pro-slavery Southern Whites who had proven more difficult in battle than the North had originally expected.

1962—In another one of those instances demonstrating the tenacity of racism among Southern Whites, Mississippi Gov. Ross Barnett defies a federal court order and personally stands in the door to block the admittance of a Black student—James Meredith—to the University of Mississippi. Meredith would eventually be admitted and graduate. Historians now generally believe Ross’ “show” was primarily designed to curry favor among White voters not actually to stop desegregation of the then-all-White university.

1867—Maggie L. Walker is born. She would become the most prominent Black businesswoman in the Richmond, Va., area and one of the wealthiest Black women in the nation. She also became the first Black woman to establish a bank in the nation. A social activist, she would help establish the Lilly Black political party in part as a slap at the “Lilly White” political parties of the day.

1907—The People’s Savings Bank is incorporated in Philadelphia by one of the nation’s early Black Congressman George H. White. White had been pretty much forced out of Congress as Jim Crow laws led to the increasing disenfranchisement of Black voters after Reconstruction. After leaving Congress, he turned his attention to Black economic advancement. His bank helped thousands of Blacks buy homes.

1937—Blues great Bessie Smith dies of injuries sustained in an automobile accident near Clarksdale, Miss. Rumors spread that White medics refused to treat her. However, later information did cast doubt on the accuracy of those rumors.

1817—Hiram R. Revels is born free in Fayetteville, N.C. Revels becomes the first Black to serve in the United States Senate shortly after the Civil War.

1876—Edward Mitchell Bannister upsets racist Whites who believe Blacks have no artistic skill by winning a bronze medal for a painting he displayed at the American Centennial Exposition in Philadelphia.

1950—Gwendolyn Brooks is awarded Pulitzer Prize for her book of poetry —“Annie Allen.” She was the first Black so honored. Brooks published her first poem in a children’s magazine, “American Childhood,” when she was 13 years old. By the time she was 16, she had compiled a portfolio of around 75 published poems and had her work critiqued by poet and novelist James Weldon Johnson. At 17, she started submitting her work to “Lights and Shadows,” the poetry column of the Chicago Defender, an African American newspaper. Her poems, many published while she attended Wilson Junior College, ranged in style from traditional ballads and sonnets to poems using blues rhythms in free verse.

1950—Ralph J. Bunch is awarded the Nobel Peace Prize for his work in mediating a conflict between Palestinians and the newly established Jewish state of Israel. Arabs had gone to war arguing the Jewish state had been established on land which rightfully belonged to the Palestinians.