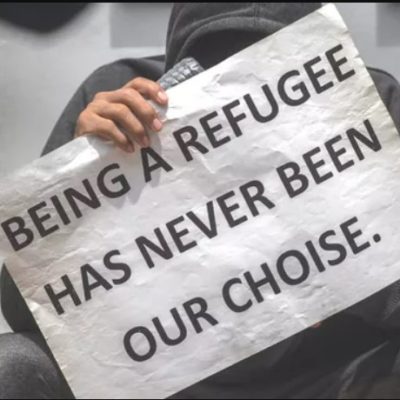 African refugees and advocates are calling on the U.S. to grant them the same humanitarian protections the Ukrainians have received during Russia’s invasion.

As Ukrainians have been swiftly welcomed into the country, the U.S. continues to turn away African and Caribbean refugees escaping conflict and abuse in their home countries.

Wilfred Tebah fled Cameroon during its ongoing crisis. He questions what the U.S. response would be if the millions fleeing Eastern Europe were people of color.

“They do not care about a Black man,” Tebah told the Associated Press.“The difference is really clear. They know what is happening over there, and they have decided to close their eyes and ears.”

In March, President Joe Biden announced extensive humanitarian efforts welcoming 100,000 Ukrainian refugees, granting Temporary Protected Status to 30,000 others already living in the U.S, and stopping all Ukrainian deportations. However, when Haitian refugees tried to seek asylum in the U.S this past summer, they faced swift expulsion.

Two Democratic lawmakers are urging the President to enact similar humanitarian aid for Haitians as more than 20,000 have been deported from the U.S. despite continued instability in their homeland.

U.S. Representatives Ayanna Pressley and Mondaire Jones told the administration, “There is every reason to extend the same level of compassion.”

Cameroonian advocates are also asking for relief as thousands have been displaced due to the country’s civil war. Last month, they protested in front of the home of Homeland Security Secretary Alejandro Mayorkas and the offices of Congressional lawmakers.