We Are Done Dying: Protests Erupt Over the Murder of George Floyd and Others 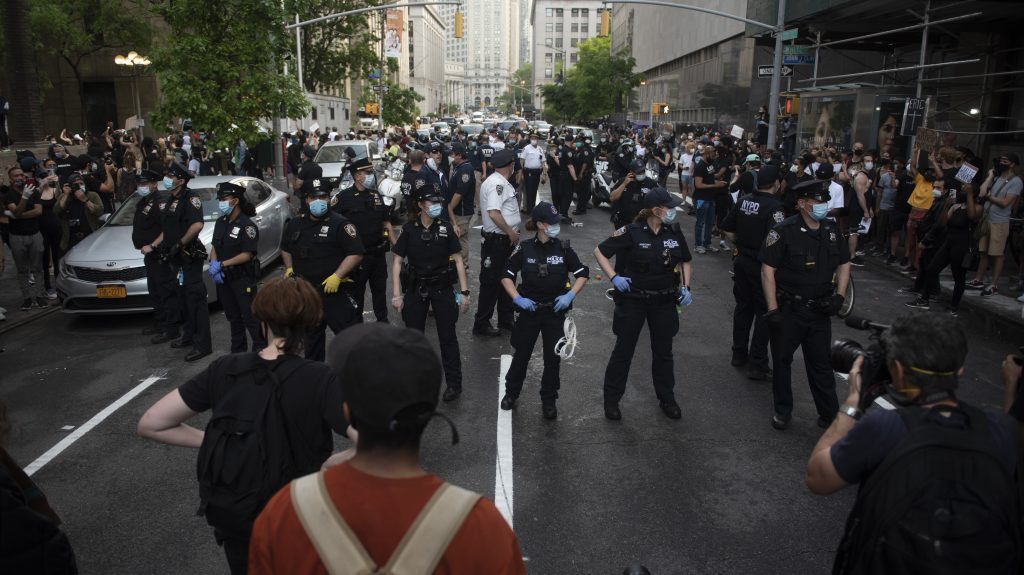 On May 25, 2020, George Floyd, an African American man, was killed in Powderhorn, a neighborhood south of downtown Minneapolis, Minn., during an arrest after allegedly attempting to spend a counterfeit bill at a deli. The store employee who called the police stated that he wasn’t sure Floyd knew it was counterfeit. While Floyd was handcuffed and lying face down on a city street during the arrest, Derek Chauvin, a white Minneapolis police officer, kept his knee on the right side of Floyd’s neck for 8 minutes and 46 seconds, this according to the criminal complaint against Chauvin. For 2 minutes and 53 seconds of that time Floyd was already dead. Officers Tou Thao, J. Alexander Kueng, and Thomas K. Lane also participated in Floyd’s arrest, with Kueng holding Floyd’s back, Lane holding his legs, and Thao looking on as he stood nearby.

In the wake of the incident several videos have surfaced from multiple angles that not only show Floyd was not aggressive but also that he begged for his life. Several cell phone videos show Floyd pleading with officers saying: ” Please, please, please, I can’t breathe” and “Please man, don’t kill me”. The videos are heartbreaking, maddening and hard to watch as the 46-year-old father of two made every attempt to save his own life and ultimately calling for his mother as it became clear that the end was near: “Momma! I’m through,” all while Chauvin rested his entire body weight on his neck for 8 minutes and 46 seconds.

The COVID-19 pandemic has placed families, communities and the world in a state of uncertainty with many facing severe respiratory complications as a result of the virus. But if you’re black your life and the life of your family has always been in a state of uncertainty. Imagine not being able to go for a jog (Ahmaud Arbery), sleep in your own bed (Breonna Taylor), leave your front door open (Atatiana Jefferson), reach for your ID (Philando Castile) or even relax in your own apartment (Botham Jean) without the threat of imminent death. No mask or amount of hand washing can prevent or even mitigate the loss of life. Sheltering in place has no impact as three of the four aforementioned incidents occurred in the victims’ own homes.

In addition to battling COVID-19, which is disproportionately ravaging the African American population, we are also fighting systemic racism and police brutality—viruses that have infected America since it’s founding. The recent murder of George Floyd and his haunting final words which echo those of Eric Garner who died after being placed in a chokehold by NYC police officer Daniel Pantaleo six years ago show us how little things have changed.

Garner’s death was also captured on video with him telling police “I can’t breathe” at least 11 times. Video footage of the incident generated widespread national attention and raised questions about law enforcement’s use of excessive force. The conversation started and seemed to fade away as people got back to business as usual.

However, with COVID-19 leaving many people at home and out of work tensions reached a fever pitch as protests emerged in various cities. Many expected this to happen, however, what is unprecedented is the response of law enforcement officers. Defying the typical “blue curtain” or “thin blue line” several officers have spoken out and shown unprecedented solidarity with the citizens.

“Based on what I saw on that video, there’s no question I would have directed an arrest,” said Detroit Police Chief James Craig. “This was murder.”

“I’m aware of the thin blue line,” Craig said. “The key as leaders is, we have to lead by example. I take a firm, transparent stance on criminal misconduct. Trust is the glue. We mustn’t forget that as police officers, we work for the community.”

Within days of Floyd’s murder, Chief Craig said he sent out a memo to DPD officers reminding them that the choke-hold the Minneapolis officers used is banned in the city.

“We wanted to reiterate the department’s use-of-force policy prohibiting neck restraints,” the chief said. “We also wanted to stress the importance of de-escalating and de-emphasizing use of force once the subject is under the officer’s control.”

That was Thursday, however Chief Craig’s supportive words and empathetic stance did not stop the protests that occurred in Detroit this past weekend.

The Demand For Justice

The first of four protests started on Friday afternoon when at least a thousand people marched on the Detroit Public Safety Headquarters. Protestors carried signs that read: “Jail Killer Cops,” “Stop Killing Black People” and “Black Lives Matter” while chanting “I can’t breathe” and “No justice, No peace.”

“We want to be with y’all for real so I took the helmet off and laid the batons down,” he said in the video. “I want to make this a parade, not a protest.”

In Floyd’s hometown of Houston, Tex., Police Chief Art Acevedo also marched with protesters. The Police Department also changed its Twitter profile picture to a rendering of Floyd with the hashtag #JusticeForFloyd.

And while Officers Derrick Chauvin, Tou Thao, J. Alexander Kueng and Thomas K. Lane have all been fired and Chauvin has been charged with third-degree murder and second-degree manslaughter. Many do not feel it’s enough.

As Rev. Dr. Martin Luther King Jr said, “It may be true that the law cannot make a man love me, but it can stop him from lynching me, and I think that’s pretty important.”

It is important that we have laws in place to protect citizens from those that are sworn to serve. No one should be above the law and while many are stepping up to provide ideas and start the dialogue one voice is noticeably quiet.

At a time like this leadership is key to extend compassion to those that feel disenfranchised, to inspire hope and to effect change. As a democratic nation we’ve entrusted elected officials and politicians to act on our best interest and no politician is in a greater position to do that than the one who holds the office of President.

Yet, Trump has been silent as cities burn and when he launches the occasional tweet it appears to only add fuel to the fire.

Never in the three and a half-year history of Trump’s presidency has the country been in more need of leadership and Trump is either unwilling or incapable of providing it. I’m willing to bet it’s a mixture of both.

His tweet declaring, “when the looting starts, the shooting starts” was a throwback to 1967 when Walter E. Headley, the police chief of Miami, Fl., said in response to an outbreak of violent crime in black neighborhoods: “When the looting starts, the shooting starts.” He accused “young hoodlums” of taking “advantage of the civil rights campaign” that was then sweeping the United States. Having ordered his troopers to combat the violence with shotguns, he told the press that “we don’t mind being accused of police brutality.”

Trump claims to not know the origin of the phrase and that could very well be true as it seems there’s a lot that he just doesn’t know. However, after his call with the Governors on Monday it’s clear where he stands. According to published reports, Gov. Gretchen Whitmer states she participated in a call where Trump “repeatedly and viciously” attacked the governors of several states telling them that if they don’t order protestors arrested and “jailed for long periods of time” they will “look like a bunch of jerks.”

“The president’s dangerous comments should be gravely concerning to all Americans, because they send a clear signal that this administration is determined to sow the seeds of hatred and division which I fear will only lead to more violence and destruction,” Whitmer said in a statement.

America is at a crossroads and with an election year upon us it has become increasingly clear that citizens need to heavily scrutinize candidate agendas and vote our interests. African Americans are crying out for economic, medical and civil relief.

“The tragic murder of George Floyd continues to highlight for our community the inadequate justice system we face in America. The entire world is able to see and witness how police brutality has yet again claimed another black life,” said Kamilia K. Landrum, Executive Director of the Detroit Branch NAACP.

“These senseless murders are why organizations such as the NAACP will remain vigilant in advocating for accountability in policing. But we won’t and can’t stop there,” Landrum continues. “Our community must stay engaged in not only national matters, but local issues as well.

“It matters who your mayor is because he or she will select your police chief. Local elections determine your prosecutor and your judges. It matters if we turn in the census form because it impacts the dollars that come into our community. These dollars will make a difference in what services and programs our communities are able to have.

“We demand and advocate for changes because #WeAreDoneDying. Black lives matter every day in every way. Make your voices heard and vote.”

The post We Are Done Dying: Protests Erupt Over the Murder of George Floyd and Others appeared first on Atlanta Daily World.