What the Inflation Reduction Act May Mean for African Americans 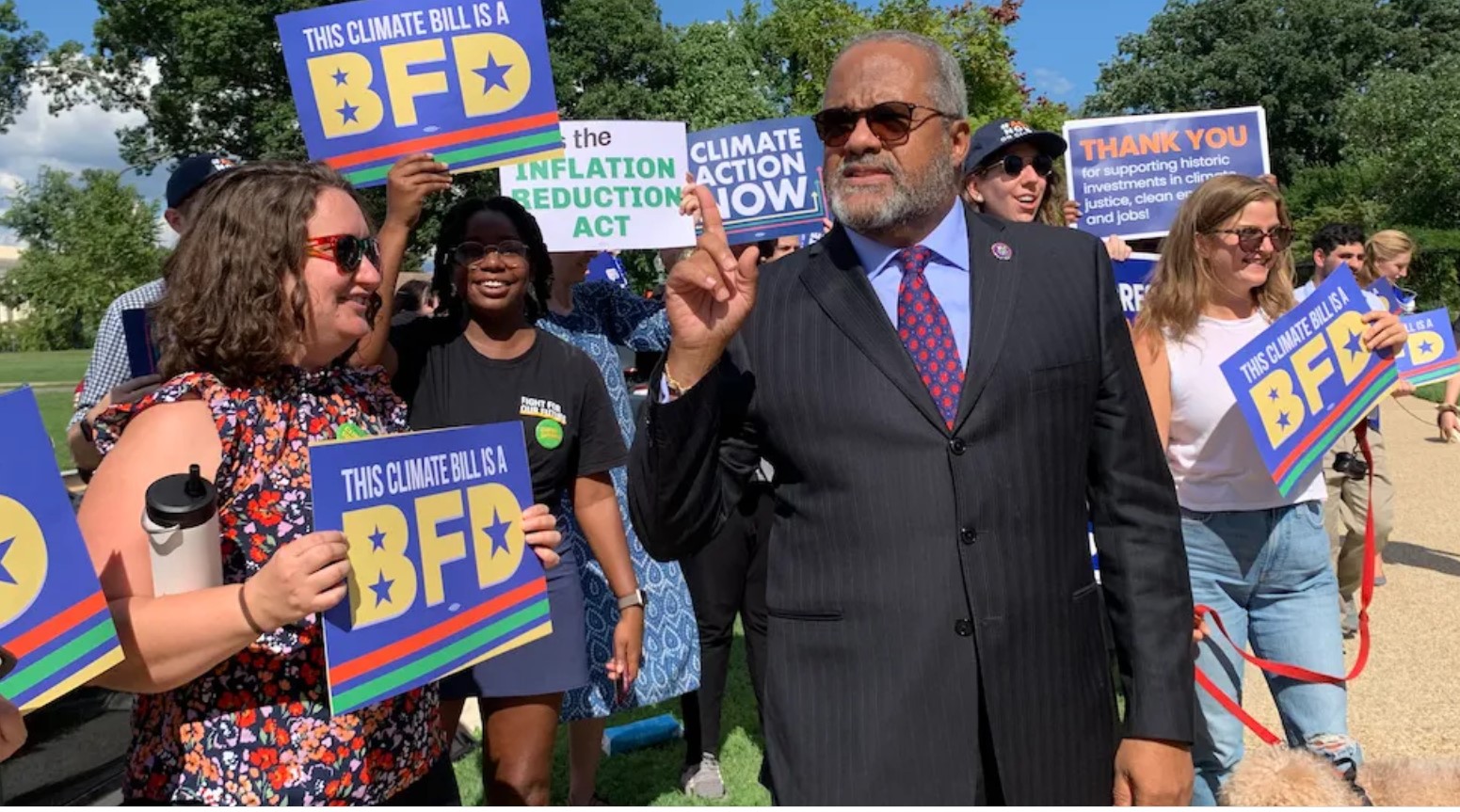 This post was originally published on The Washington Informer

About 25 climate advocates stood near the Capitol building to support the passage of the nation’s biggest investment in climate change action at 8:30 a.m. on Friday, August 12. By 5:00 p.m., more than 200 people had gathered to celebrate as the bill passed with votes from every Democratic representative.

Though the bill’s biggest funding goes toward renewable energy subsidies and pollution-fighting programs, the crowd included a broad progressive coalition. Provisions aimed at lowering health care costs and energy bills also made it into the final legislation, alongside measures to reduce the federal deficit.

Titled the Inflation Reduction Act, the bill passed both the House and the Senate in strict party-line votes. President Biden signed it into law Tuesday, August 16.

“This bill is historic – it will do a lot of things for Black Americans who are disproportionately impacted by climate change, prescription drug costs and health care costs,” said Bart Rutherford, the director of state partnerships for Building Back Together, a group that supports the Biden-Harris policy agenda. “But there’s more work to be done.”

Analysts have generally agreed that the Inflation Reduction Act will only have a modest impact on inflation over the bill’s 10-year lifespan, according to reporting from NPR’s Juliana Kim. Climate and environmental justice advocates remain concerned that it opens up big swaths of public land for potential fossil fuel drilling. These oil and natural gas projects would disproportionately pollute the same communities that have historically faced environmental injustice, Earthjustice Healthy Communities scientist Michelle Mabson said.

Still, Blacks stand to benefit from a number of the bill’s key measures including health care savings and tax credits that can enable low- and middle-income to buy electric cars or install renewable energy technology in their homes.

The IRA’s health care provisions primarily impact two sets of people: those who get their health insurance through the Affordable Care Act marketplace and people, mostly seniors, on Medicare. D.C. has just over 94,000 Medicare enrollees, more than 60% of whom are Black, according to Kaiser Family Foundation data.

“I don’t think there’s any member of Congress that doesn’t have constituents that we can actually visualize in our minds that this bill isn’t going to help, particularly with the Medicare piece,” said Rep. Susan Wilde, a Democrat from Pennsylvania, outside the Capitol building before the vote.

Among other changes to Medicare, IRA institutes a $2,000 cap on out-of-pocket spending for prescription drugs for beneficiaries and enables Medicare to negotiate for lower drug prices. Together, the changes could save some seniors thousands of dollars in drug costs, according to analysis by Rachel Sachs in the journal Health Affairs.

For ACA marketplace users, the law extends pandemic-era subsidies that prevent anyone from paying more than 8.5% of their income on monthly premiums which had been set to expire this year but will now remain in place until 2025. The change saves the average HealthCare.gov user $700 a year, according to data from the Department of Health and Human Services.

“It is our communities who are uninsured and underinsured in many instances,” said environmental justice leader Mustafa Santiago Ali, executive vice president for the National Wildlife Federation. “And in our communities, we are disproportionately impacted by a number of public health challenges.”

The IRA addresses one such challenge: diabetes, which is almost 5% more prevalent among Blacks than whites according to the CDC. The bill includes a $35 cap on the price of insulin for Medicare users.

Most of the IRA’s funding — almost $370 billion — goes toward clean energy incentives. Consumers will have access to up to $4,000 in tax credits to buy a used electric car, for example, and low-income homeowners can claim rebates for electrifying home appliances or installing electric heat pumps.

The nonprofit group Rewiring America estimated that households that take advantage of such programs will save an average of $1,800 per year on electric bills.

The upfront costs of electrifying one’s home prevent most lower-income Americans from trying to switch to clean energy, even if it could save money in the long term, Ali pointed out. He and other environmental justice advocates see the bill as the first major attempt to make “going green” accessible to low- and moderate-income Americans.

On the other hand, Mabson points out that most low-income people of color, especially in the District, are renters, not homeowners. The electrification measures will not immediately benefit people who can’t make those decisions about their home’s energy infrastructure.

Over time, however, greater adoption of green technology will likely bring down the cost of energy across the board.

“On things like electricity and heating, the costs are through the roof in most parts of the country right now,” Derek Walker, vice president for the U.S. Region at the Environmental Defense Fund, said. “Support for energy efficiency and renewables will really capitalize on what the market has already done in the last decades to make clean energy, in many cases, cheaper than fossil energy.”

The IRA’s climate provisions will enable the U.S. to reduce its greenhouse gas emissions 40% by 2030 compared to the peak level in 2005, a major step toward Biden’s commitment to a 50% reduction in that timeframe. In addition to credits for green tech, the bill sets methane limits for oil and gas drills and creates incentives for the industrial sector to cut back on emissions.

While climate change impacts everyone, Ali said mitigating the climate crisis remains particularly vital for Black communities who are often “hit first and worst” when it comes to things like heat waves and hurricanes.

The bill also includes $60 billion for environmental justice – an issue that the Biden Administration identified as a key priority. That money includes funding for a wide range of initiatives including cutting down on pollution near ports, monitoring air quality and cleaning up abandoned mines.

“The communities that were historically red-lined are literally hotter today because of climate change because there is more pavement and there are fewer trees,” Deputy White House National Climate Advisor Ali Zaidi said. “This bill includes $1.5 billion to help address that issue to get trees into those communities.”

Mabson said she isn’t sold on the IRA’s environmental justice bona fides, since the bill also offers up land for drilling and oil pipelines. Advocates, even those supporting the bill like Ali, remain concerned that these industries will continue polluting the same communities that have borne the brunt of their toxins for decades.

“We all understand the political process but we also understand that our communities continue to carry the burden,” Ali said. “Over the years we have had to fight for every possible piece of advancement, every possible resource, so we understand that no one is going to hand us anything, no one is coming to save us. So, we make calculated decisions about what parts are positive and the work that we still need to do.”

The post What the Inflation Reduction Act May Mean for African Americans appeared first on The Washington Informer.

The post What the Inflation Reduction Act May Mean for African Americans appeared first on Atlanta Daily World.