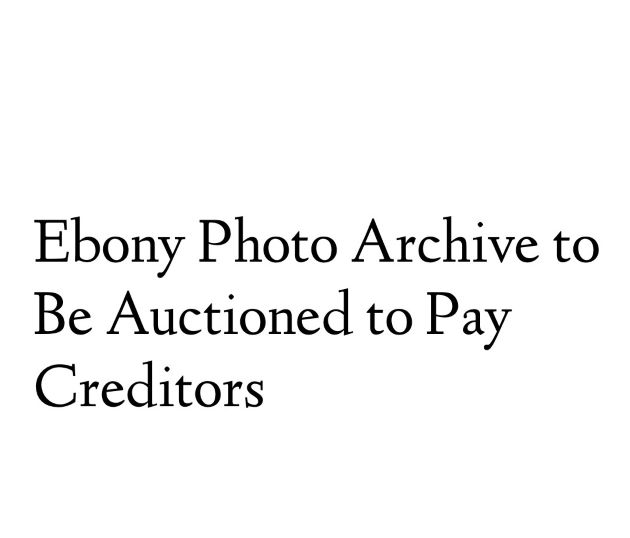 The Ebony photo archives, a unique and expansive window into the African American experience, are set to go on the auction block in July, pending approval from a Chicago federal bankruptcy court.

Opening bids are expected to start at about $13 million for the historic collection, with the proceeds to pay off secured creditors of Johnson Publishing, the former magazine publisher which filed for Chapter 7 bankruptcy protection in April.

Chicago-based Johnson Publishing, which sold its magazine portfolio — Ebony and Jet — three years ago, has been trying unsuccessfully to sell its photo archives since 2015, when the collection was appraised at $46 million.

“The company was not a compelled seller at the time and it’s possible the asking price was just too high,” Fried said.

The bankruptcy auction is seeking to recover at least $13.6 million owed to secured creditors George Lucas and Mellody Hobson, whose company, Capital V Holdings, issued a $12 million loan to a struggling Johnson Publishing in 2015.

The filmmaker and his financier wife are free to bid on the archives using the $13.6 million they are owed in principal and interest, but would receive the full collection in a foreclosure if no other bidder steps up, Fried said. Any additional money would go to unsecured creditors.

An attorney representing Lucas and Hobson in the Johnson Publishing bankruptcy proceedings did not respond to a request for comment Wednesday.