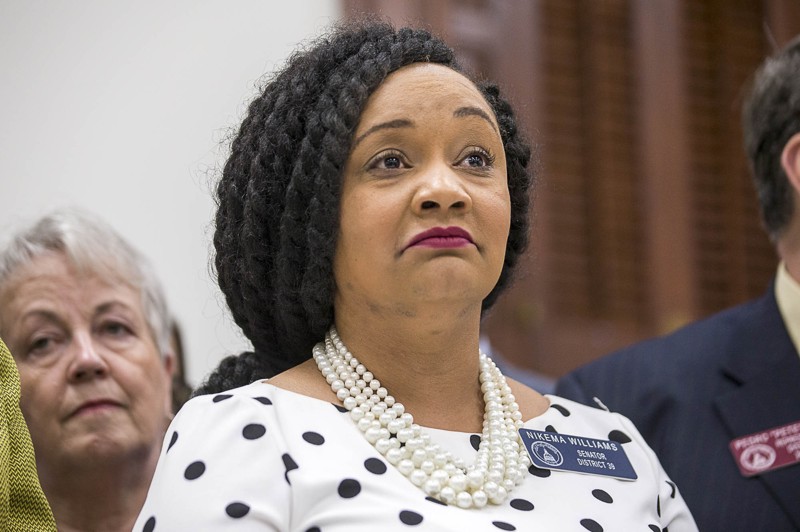 “Disgusting. We learn this on a day that 190,000 Americans are dead and he knew this? I understand he had just gotten off the phone when he did the first interview with Woodward. He had just gotten off the phone with Xi Jinping where he is praising him about transparency and this is nothing to worry about and this is going to go away like a miracle. what in god’s name would a man like — I don’t get it. I truly don’t get it. It’s like what he — the way he talks about our veterans. I mean, it’s astounding to me,” said Joe Biden.

“After nearly 200,000 Americans and six thousand Georgians have died from this virus, it is absolutely contemptible to learn that Donald Trump knew exactly what he was doing when he downplayed and mismanaged this pandemic to devastating effects. Americans have lost their lives and livelihoods because of this president’s complete failure to lead, and now we know for sure that Donald Trump knowingly and willingly lied to the American public for months. We must elect Joe Biden on November 3rd, who will lead with accountability and transparency, and help our country finally recover from COVID-19 and Donald Trump.” said Democratic Party of Georgia Chairwoman Nikema Williams.

“For months, Donald Trump and David Perdue knew about the serious threat coronavirus posed to our health and economy, but they systematically contradicted medical experts and lied to the public by downplaying the threat, while Senator Perdue was aggressively trading medical stocks to line his own pockets. They have no record but widespread disease, economic devastation, lies, and corruption, and they must be defeated,” said United States Senate Candidate Jon Ossoff.

“Woodward’s book provides the receipts for what we already knew: Trump has willfully mismanaged the pandemic in spite of receiving sound scientific advice from people within his own administration. He has made the pandemic about his own political survival rather than the survival of our citizens and, as a result, nearly 200,000 people have died, tens of millions of people have lost their livelihoods, and our economy has been seriously damaged. While other countries put their public health experts in the driver’s seat, he has put ours in the back seat, if they are still even in the car at all. He quickly sidelined the CDC after CDC Respiratory Diseases Director Dr. Nancy Messonnier spoke truth about the severity of the pandemic on February 25. He could have taken action to contain the virus and mitigate its spread, but instead he chose to do the opposite and to lie about the facts. He strong-armed the FDA into approving hydroxychloroquine and issuing an emergency use authorization for convalescent plasma, against the advice of his own scientists. He still doesn’t have a pandemic plan because he threw out the one that was established by Obama/Biden and fired the personnel who could have implemented it. As a result, we still do not have adequate testing, isolation, and contact tracing to contain outbreaks or to allow our children to go to school again. We need a president like Joe Biden who will value scientific and health expertise and who will tell the truth to the American people,” said Dr. Melanie Thompson, HIV Researcher and Physician, Atlanta, GA.