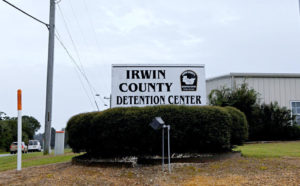 Ocilla, Georgia — Today, Project South, Georgia Detention Watch, GLAHR, South Georgia Immigrant Support Network, and Detention Watch Network are celebrating the news that Immigration and Customs Enforcement (ICE) will cut the contract for the Irwin County Detention Center (Irwin) in Ocilla, Georgia. Along with the end of the Bristol County contract, also announced today, this is the first time ICE has cut a contract for a detention center in recent years. The announcement signals a major win for people who’ve been detained at the facility and have bravely spoken out against the abuses they’ve experienced and also for organizations in Georgia that have long fought to shut it down. Irwin is the first detention center included in Detention Watch Network’s “First Ten to Communities Not Cages” campaign to be on the path to closure.

The announcement comes eight months after a shocking DHS OIG complaint was filed by Georgia-based groups that included horrific accounts from detained immigrants and whistleblower nurse, Dawn Wooten, describing multiple levels of abuse including neglecting to follow COVID-19 protocol and a pattern of unnecessary and invasive gynecological procedures performed on women held at the facility without informed consent. Accounts of medical abuse garnered national headlines and prompted a Congressional inquiry into the facility. The complaint was the latest piece of evidence against the facility that has a documented record of abuse since opening its doors in 2010.

Today’s announcement to terminate Irwin’s contract comes in conjunction with the news that the Bristol County Detention Center contract will also end in North Dartmouth, MA and that ICE’s detention system will go under review. Encouraged by today’s actions, advocates say today’s announcement is long overdue, demanding the Biden administration continue to cut detention contracts, shut down facilities for good and ensure that people are released and not transferred to other detention centers.

“I want to say a big thank you to each and every person at Project South and Families for Freedom for listening to me and understanding my pain. In September 2018, my nightmare began when I entered Irwin County Detention Center where I feared for my life. We, as mothers, grandmothers and aunts were treated like we weren’t human by Irwin county staff. I still cry day and night. I still have flashbacks and nightmares when I remember the shackles, the food, the place, and most of all the treatment.

I fought for the shut down and to tell my truth how best I remember. I’m suffering from mental problems and physical problems. My body is not the same, my mind is not the same. I’m scared for the rest of my life, but I have peace to know that another mother is not going to go through the same nightmare I went through….mentally physically and emotionally.

I asked God everyday to please give me peace, a strong mind and good health. My health has been deteriorating as a result of my 1 year and 6 months at Irwin, but it gives me great pleasure to know its OVER…my God is awesome.”

“For over a decade, LaSalle and ICE have ignored, threatened, and even attacked immigrants at Irwin in an attempt to silence them. When detained immigrants sent letters and videos to the public about the lack of COVID-19 protocol at Irwin, they were punished. When they filed urgent medical requests and grievances, the documents were not recorded or were even shredded. When they advocated for improved conditions, they were locked away in solitary confinement. And, when they spoke up about the horrifying medical abuse they endured, they faced retaliation. Today matters because the people suffering abuse at Irwin have been seen. Yet we know that so many others within the detention and carceral system are still enduring these same abuses. We hope that today will serve as a first step to continuing to shut these prisons down and work towards repairing the grave harm done.”

“First and foremost, we applaud the brave detained people who have demanded their freedom. The shut down of Irwin is happening because of their bravery and the years of advocacy work led by local groups documenting how inhumane and unjust the facility is. And while we are celebrate this win, we know that this must be the first step of many, including ensuring that people are released and not transferred to other detention centers when contracts end. Irwin exemplifies how the system as a whole is fundamentally flawed and we call on the Biden administration to continue to cut detention contracts and shut down centers for good. Simply put, everyone should be able to navigate their immigration case at home and in community — not behind bars in immigration detention.“

“Today’s closure marks an important step in the right direction—but this country’s disgraceful practice of profiteering from locking people up lives on. We will not stop fighting until we end the private detention racket, dismantle the cruel deportation machine, and reverse the racist criminalization of immigration in this country.”

“The closure of the Irwin County Detention Center marks a decisive victory in the long war against white supremacy in the US south and across the globe. While they have yet to receive justice, today those who suffered at Irwin have been vindicated. The abuses at Irwin are emblematic of our urgent need to end immigrant detention and abolish ICE.”

“While building relationships with immigrants detained at ICDC over the last four years, local volunteers learned the harsh realities of abuse, neglect, and inhumanity at this for-profit center. We celebrate this hard-won end to immigrant detention at ICDC, and yet we lament the continued suffering of all harmed in body, mind, and spirit at this center, including employees. The incalculable damage caused by immigrant detention confirms that imprisonment is no solution to worldwide immigration challenges. We hope DHS’s decision to cut the contract is a tipping point toward a humane immigration system, a long-term commitment to justice and healing for all survivors, and a brighter future for communities negatively impacted by immigrant detention.”