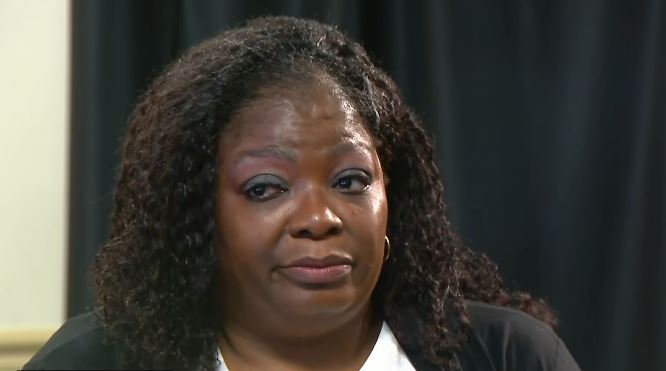 Two years ago, 50-year-old social worker, Anjanette Young, returned home from work and began to undress when Chicago Police raided her home. Police rammed her front door down with a battering ram and barged into her house at night to execute a search warrant. Recently released bodycam footage obtained by CBS2 Chicago shows Young naked and handcuffed while pleading with the nine male police officers. It was later learned that the Police were given the wrong address. Anjanette Young was never a suspect.

“Oh, My God! This can’t be right! How can this be legal? You got the wrong house!” 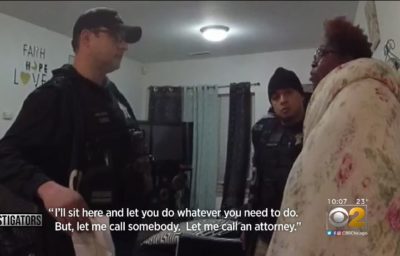 The footage shows an officer wrapping a coat around her shoulders but still leaving most of her body exposed as they search her home. The disturbing video is heartbreaking as you hear Anjanette Young crying and pleading with officers to tell her what is happening and why. She cries while telling officers more than 40 times that they are in the wrong home to no avail. She screams that she is a law abiding citizen and a social worker for over 20 years as the police continue to question her. The Chicago Police Department arrived at her address which was given to them by an informant. As part of an ongoing investigative reporting series, “Unwarranted“, CBS2 Chicago reports the informant gave police the wrong address. The suspect, a 23-year-old, lived next door and was wearing an electronic monitoring device. The suspect has no connection to Young.

About 15 minutes into the raid, Anjanette Young is uncuffed and escorted into her bedroom to put on clothes. Once dressed she’s cuffed again and questioned by police. She’s crying and shouting in confusion, still not understanding why the police are in her home. Towards the end of the video, a sergeant asks another officer to step outside; then the body cam is turned off. Moments later, a sergeant apologizes to Young, saying, “I do apologize to you tonight. The City will be in contact with you tomorrow.” Officers attempt to fix her broken door before leaving.

On Monday, the City of Chicago’s legal team attempted to block the news stations’ broadcast of the video by filing a motion in federal court. The City also sought to penalize Young saying she violated a confidentiality order. The motion was denied, and the station aired the video footage last night.

Mayor Lightfoot released a statement saying she was unaware of the incident until yesterday.

“I became aware of an incident involving Ms. Anjanette Young from February 2019, before I became Mayor, and I saw a video today for the first time. I had no knowledge of either until today. I had a very emotional reaction to what was depicted on the video, as I imagine that many people did. In 2019, I directed the City’s chief risk officer to review CPD’s search warrant policies and practices and recommend improvements where appropriate. As a result of that work, and in conjunction with the CPD risk manager, a new search warrant policy went into effect in January 2020. Among the various changes, the new policy requires additional CPD supervisory review and sign off before a search warrant can be sought from a judge, and there must be separate verification that the property in question is indeed the correct location in which evidence of criminal activity can be found.  “I have further directed a review of how this matter was handled by various City departments to determine that there was compliance with City procedures. “Since this matter is the subject of litigation and an open COPA investigation, I will have no further comment.”

This is not the first time the City is accused of hiding video footage of police-related incidents. Then-Mayor, Rahm Emmanuel sought to hide bodycam footage of the murder of LaQuan McDonald, shot 17 times by police. The story made national headlines. With the recent murders by police of African Americans, specifically, the murder of Breonna Taylor, who was killed while police attempted to execute a warrant, Anjanette Young’s experience is terrifying.

A GoFund Me was created to benefit Progressive Baptist Church, Social Justice Ministry, where Anjanette Young serves as a planning team member. The fund provides legal assistance and support to those facing similar experiences. Young uses her background in clinical social work to help the community address trauma and mental health issues.

Anjanette Young filed a lawsuit against the Chicago Police Department in 2019, and COPA is investigating the handling of this incident.