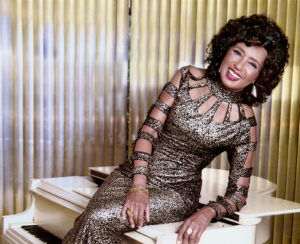 The esteemed entertainer Jo Thompson, lovingly referred to as the “The Fabulous Ms. Jo Thompson” recently passed away at the age of 92. The velvety-voiced songstress and grand dame of a musical era noted for the emergence of a new genre of classic jazz performers during the 1940s and ‘50s is like so many great artists garnering widespread recognition since her passing.

For decades Thompson enjoyed traveling in celebrity circles where she earned the respect of the leading performers of the time who embraced the young singer’s remarkable talent and innate appreciation for music.

The Detroit-born Thompson was among the very first Black artists able to perform in exclusive clubs throughout the country, particularly on Miami’s swank nightclub circuit. She was among only three female Detroit performers to play at New York City’s coveted Cafe Carlyle, along with recently departed Supremes; singer Mary Wilson and Broadway star Elaine Stritch,

From New York From New York City’s legendary Tavern On the Green to venues around the world, Ms. Thompson broke racial barriers during the decades she sang and played the piano, compelling music lovers to liken her to a “piano playing Lena Horne. She would deliver moving performances to audiences from Detroit’s top supper clubs to popular venues in Cuba, New York, London and Paris during the 1950s.

Thompson brought top-level entertainment and immense enjoyment to audiences around the country and the world. Throughout this jazzy cabaret stylist’s legendary career, she amassed a fan base of loyal listeners which included many of the top entertainers and celebrities of the time including; Tony Bennet, Louis Jordan, Frank Sinatra, Sammy, Davis Jr, Lena Horne, Lionel Hampton and a who’s who list of beloved artists.

Thompson who first sang the classic, “For Once in My Life” delivered the timeless ballad to a bevy of music aficionados who recognized the enigmatic singer’s interpretation of the song, including its legendary writer, Ron Miller – who thanked her for being the first to publicly sing the timeless classic, long-before Tony Bennett and Stevie Wonder would bring worldwide attention to the song.

As an esteemed entertainer with a long-standing “love affair” relationship with the Black Press, Thompson would ultimately marry legendary journalist and Michigan Journalism Hall of Fame inductee, Al Dunmore, editor of the iconic newspapers the Pittsburgh Courier and the Michigan Chronicle. As the story goes, Thompson who was wowing crowds around the nation as one of the first Black performers to play the sophisticated nightclub circuit of Miami Beach caught the eye of Dunmore when she appeared on the cover of the Pittsburg Courier’s magazine section and the savvy editor, smitten by the photo determined then and there to make the singer his bride.

Thompson was the most consistently publicized of any entertainer from Detroit by the Michigan Chronicle having first been covered in the late 1940s by Hoyt Fuller to the 2000s by the Michigan Chronicle’s Steve Holsey as well as her son Greg Dunmore (who wrote a popular column for the Chronicle with noted photojournalist Monica Morgan.) Again, no other Detroit artist can claim the consistent and ongoing coverage she received from the paper for a span of more than 60 years.

Frankly, Aretha Franklin, the Queen of Soul who often asked Thompson to perform for her hit the mark when she said, “Jo Thompson is fabulous, absolutely, fabulous.”

But Jo Thompson was more than fabulous and famous – she was a foremother of great music to come.

Thompson leaves to revel in their mother’s legacy three sons, Jonathan, Gregory, and Stephen, all having graduated from such prestigious Ivy League schools as Cornell University, Harvard and the University of Pennsylvania.