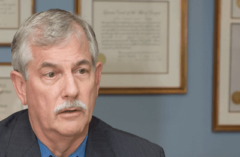 “My heart has grown heavy as I am saddened to learn of the death of former Atlanta City Council member and attorney John Sweet. John was not only a friend of my family, but a friend to all of Atlanta. He was a dedicated public servant and an even more dedicated citizen of this city. A loving family man and husband, my deepest condolences go out to his beautiful wife, Midge, and her children. All of Atlanta should pause and note the passing of its faithful son who like Cincinnatus, answered the call to service on behalf of his fellow citizens. May God bless and comfort the Sweet family during this time.” – Post 1 At-Large Council member Michael Julian Bond

“The District 2 City Council seat has been held by giants, fighters, and those with a deft touch and worldly wisdom. John Sweet was all of these. As our city exploded in growth and stature, John introduced a generation of politics that put people and neighborhoods first. He stood for equity and justice above all, which is not an easy task, but one that is vital for the preservation of Atlanta’s DNA. Our city owes John a debt of gratitude for raising the bar on what public service and city making can be. Our hearts are heavy. We mourn his passing and send his wife, Midge, our full and deepest condolences.” – District 2 Council member Amir Farokhi

“Although I did not have an opportunity to serve with John while he was on City Council, I knew that he was a tenacious fighter for the district that he represented. After leaving politics, he set up an office as an attorney at the corner of Peachtree Street and Trinity Avenue and was there for many years. He remained a long-time resident of the Inman Park neighborhood of which he loved. Thank you, John.” – District 4 Council member Cleta Winslow

“We honor the honorable John Sweet for his many contributions to the Atlanta community, including serving as a member of the Atlanta City Council. He also served on the boards of the Georgia ACLU and Metro Fair Housing. Additionally, he co-founded Georgia Conservation Voters and the Bond Community Federal Credit Union. He was an ardent supporter of Georgia’s environmental movement and the Sierra Club. Above all, we acknowledge Councilman Sweet for his commitment to the poor and the underserved. He gave of his time, love and financial resources to ensure that all voices would be heard. He treated those without homes in the streets like he treated those in the corporate suites. In his full life, he still took time to coach little league soccer, launching the Atlanta Youth Soccer Association and Phoenix Youth Soccer Association, recruiting parents as coaches, as well as coaching and refereeing himself. Councilman Sweet will be truly missed by all he mentored. Atlanta is a much greater place because John Sweet dwelled amongst us.” – District 10 Council member Andrea Boone

“John Sweet served his community with true dedication and was always committed to fairness and equity. It was clear that he had a sincere joy and passion for helping people and the sincerity and earnestness that he showed in his public service was a shining example to us all. My thoughts and prayers are with his family and all who loved and admired him.” – District 11 Council member Marci Collier Overstreet

The post Statements from Atlanta City Council Members on the passing of John Sweet appeared first on Atlanta Daily World.